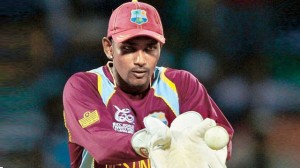 West Indies extended their 16-year series losing slump against Australia after another disastrous batting display left them with a heavy 277-run defeat in the second Test yesterday, and a 2-0 drubbing in the two-Test series.

Resuming the penultimate day on 16 for two in pursuit of a highly improbable 392 for victory, the Caribbean side lost their last eight wickets for 98 runs to be dismissed in their second innings for 114 — their lowest total in 15 years against the Aussies.

Captain Denesh Ramdin top-scored with 29 and tail-ender Veerasammy Permaul, 23 not out, but they were the only ones to pass 20 and just two of four to reach double figures. Their stand of 49 for the eighth wicket was the best of the innings.

The Windies demise was set in motion when they lost five wickets in the morning session to crash to 72 for seven at lunch, and the demolition was completed 40 minutes after lunch when Jerome Taylor missed a wild heave and was bowled first ball by off-spinner Nathan Lyon.

Left-arm seamer Mitchell Starc was the best bowler with three for 34 while off-spinner Nathan Lyon (2-12), pacer Josh Hazlewood (2-18) and left-armer Mitchell Johnson (2-23) all picked up two wickets each.

The result means West Indies have now lost every series against the Aussies since their 2-2 draw in the five-match rubber in the Caribbean back in 1999.

More tellingly, they have won just one Test against their old foes since that series, with yesterday’s defeat at Sabina Park being their 19th in 23 matches during that period.

Needing a miracle to survive the day far less reach their target, West Indies suffered their first blow in the fifth over of the morning when Shane Dowrich, unbeaten on one overnight, played across a good length ball from Starc and had his off-stump disturbed, after adding just three.

Left-hander Darren Bravo, unbeaten on eight at the start, followed just 20 balls later for 11, poking tentatively at one from Hazlewood pitched on off-stump and edging to gully where Shaun Marsh gobbled up the catch inches from the turf.

Wickets continued to tumble with Jermaine Blackwood bottom-edging a timid drive at Hazlewood onto his stumps without scoring on the brink of the first hour, and Shai Hope lasted over an hour for his 16 before playing all around one from left-armer Mitchell Johnson and having his stumps rattled.

Plummeting quickly at 55 for six, West Indies endured yet another setback when first innings hero Jason Holder was out softly, clipping a simple catch off an innocuous Shane Watson delivery, to short mid-wicket where Starc snared the offering.

Reeling at lunch, Ramdin and Permaul gathered runs quickly – though unconvincingly – after the break with Permaul collecting a streaky boundary to third man through the cordon off Starc in the third over and Ramdin edging Hazlewood wide of Clarke for four in the next over.

The stand ensured West Indies avoided the ignominy of being bowled out for below three figures and was growing nicely when Ramdin fell to the second ball of a new Johnson spell, caught at slip by Clarke as he pushed defensively, half-hour after lunch.

Tottering on 111 for eight, the Windies’ end came swiftly as Lyon wrapped up the innings the following over. He removed Kemar Roach for three to a catch at short-leg by Man-of-the-Match Steve Smith and then watched as Taylor threw caution to the wind first ball, and was bowled. West Indies lost the first Test at Windsor Park in Dominica last week by nine wickets.