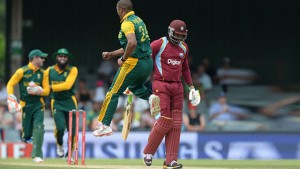 Vernon Philander had Chris Gayle caught behind cheaply which set the tone for the day. (Photo courtesy espncricinfo)

Needing a win to stay alive in the series after falling behind 2-0 in the series, West Indies could only muster a dreadful 122 all out off 33.4 overs after opting to bat first at Buffalo Park.

Stroke-maker Marlon Samuels top scored with 26 but no other batsman could pass 20, as Man-of-the-Match seamer Vernon Philander, with three for 27, and then leg-spinner Imran Tahir, with four for 28, ripped apart the Caribbean side’s innings.

In reply, opener Hashim Amla stroked an unbeaten 61 and Faf du Plessis, 51 not out, as they propelled the hosts to their modest target off just 24.2 overs and a winning 3-0 lead in the series.

The right-handed Amla, who has been in terrific form in the series, faced 63 balls and counted nine fours while du Plessis, also a right-hander, hit five fours in a 71-ball innings.

For Amla, the knock was his third time past fifty in the series, following his 66 in Durban and his 153 not out in Johannesburg last Sunday. He has been dismissed only once.

Rilee Rissouw was the only South African casualty, mis-cuing a pull to Narsingh Deonarine at mid-off off captain and pacer Jason Holder for seven with the score on 27 in the sixth over.

Amla and du Plessis then settled down in an unbroken 97-run, stand for the second wicket.

Philander had earlier struck telling blows at the top of the order, removing both openers, to leave the Windies in strife at six for two in the fourth over.

The right-armer induced Dwayne Smith (5) into an edge behind off the first ball of the second over and then also had talisman Chris Gayle (1) caught at the wicket, driving loosely at a fullish delivery in the fourth over.

Samuels and left-hander Narsingh Deonarine, (10) in his first match of the series, stemmed the flow of wickets with a 27-run, third wicket stand which proved the second highest partnership of the innings.

Both batsmen were away with well-timed boundaries, and appeared at ease against the South African attack until the introduction of strike bowler Dale Steyn in the eighth over.

He had an immediate impact, snaring his 150th ODI scalp by having Deonarine caught behind after Amla at first slip parried the initial attempt to AB de Villiers.

Deonarine’s dismissal saw three wickets tumble for 19 runs in the space of 47 balls as Denesh Ramdin dragged on to Steyn for two and Samuels, after facing 38 balls and striking four fours, needlessly holed out to long off off Imran Tahir in the 17th over.

Languishing at 52 for five, it was then left to Jonathan Carter, 18, and Andre Russell, 16, to save the innings from total collapse with a stand of 31 – the highest partnership of the innings.

The left-handed Carter cleared the ropes at mid-wicket with Imran Tahir in the bowler’s fourth over, the 24th of the innings, while Russell got two boundaries in a Steyn over, as West Indies aimed for recovery.

West Indies seemed to be fighting back when Russell missed an ugly swipe at seamer Morne Morkel and was bowled in the 25th over and six balls later in the next over, Carter followed when he missed a pull at Imran Tahir, was hit on the back foot and adjudged lbw.

The wickets of Carlos Brathwaite (4) and Jerome Taylor (0) added to the carnage as West Indies lost four wickets for 13 runs in quick time.

Tottering on 96 for nine and in danger of falling for their eighth lowest total in ODIs, Sulieman Benn clobbered two fours and a six in a 19-ball 18, adding 26 for the last wicket stand with Holder (17 not out), to steer the Windies away from total embarrassment.