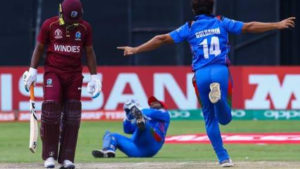 Hoping for revenge in the final at Harare Sports Club after two losses in the competition to the Asian side, West Indies never mounted a serious challenge, dismissed for 204 and then watching as Afghanistan strolled to their target with nearly 10 overs remaining.

Opting to bat first, the Caribbean side were coasting at 73 for two in the 18th over before slumping to lose their last eight wickets for 131 runs.

All-rounder Rovman Powell top-scored with 44, left-hander Shimron Hetmyer chipped in with 38, while Evin Lewis got 27 and Ashley Nurse struck an unbeaten 26 towards the end.

Sixteen-year-old off-spinner Mujeeb Ur Rahman was again brilliant with the new ball taking four for 43, while seamer Gulbadin Naib picked up two for 28.

Man-of-the-Match Mohammad Shahzad then took the game from the Windies with a typically aggressive 84 off 93 balls, as Aghanistan dominated the early stages of the innings to put the result beyond doubt.

Rahmat Shah weighed in with 51, while Mohammed Nabi arrived with victory already in sight to blast a cameo unbeaten 27, ending the contest in style with three successsive sixes down the ground off part-time off-spinner Chris Gayle.

The victory completed a fairy-tale turnaround for the Phil Simmons-coached side who had barely squeezed into the second stage of the tournament after winning just a single match in the preliminaries.

Buoyed by a warm-up and Super Six victory over the Windies already in the tournament, Afghanistan started positively when Mujeeb claimed talismanic opener Chris Gayle for 10 in the sixth over, caught by Sharafuddin Ashraf running around from point after miscuing one that spun across him.

The left-handed Lewis then stroked six fours in a fluent 36-ball knock in adding 34 for the second wicket with Shai Hope (23) to stabilise the innings.

However, Lewis departed in the 11th over, caught at the wicket nicking a booming drive at Gulbadin Naib, and Marlon Samuels lasted 26 deliveires for his 17 before smashing a short one from the same bowler to Rahmat Shah at short midwicket in the 18th over.

Hope posted 26 with Hetmyer for the fourth wicket, but was one of two wickets to fall in quick succession as West Indies slipped to 101 for five in the 24th over.

The right-handed Hope missed a pull at a googly from Rashid Khan and was lbw in the 23rd over and captain Jason Holder was run out at the non-striker’s end two balls later in the next over, failing to regain his ground after backing up too far for a third run.

It was left for Powell to revitalise the innings, posting 37 for the sixth wicket with Hetmyer before putting on a further 41 for the eighth with Nurse.

Hetmyer, who faced 51 balls and counted three fours, eventually perished when he edged left-arm spinner Sharafuddin Ashraf behind in the 33rd over, and Carlos Brathwaite belted a four and a six in 14 before holing out to mid-off off speedster Dawlat Zadran.

Powell ensured the Windies got runs down the order, however, facing 75 balls and striking a four and a couple of sixes, while Nurse counted three fours in a 29-ball knock.

Once Powell missed a heave at Mujeeb and lost his off-stump, the last three wickets tumbled without a run added.

Any hopes the Windies had of an early breakthrough were then dashed as Shahzad anchored two half-century parnterships up front to guarantee the Afghan side a solid start to their run chase.

The right-hander blasted 11 fours and two sixes, adding a run-a-ball 58 for the first wicket with Gulbadin (14) before posting another 90 for the second wicket with Rahmat Shah.

Gulbadin was first to fall, edging a wide one from seamer Keemo Paul to Gayle at slip in the 10th over before Shahzad, with a century in sight, whacked an innocuous delivery from Gayle to mid-off where Holder took a simple catch.

Rahmat completed a deserved half-century, striking four fours off 78 deliveries and seemed intent on seeing Afghanistan home but missed a charge at Gayle and was easily stumped by hope in the 37th.

Even then there was no cause for alarm as Nabi and Samiullah Shenwari (20 not out) formalised the win in an unbroken 36-run partnership.