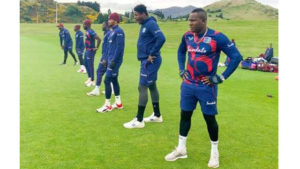 Despite the absence of several key players, West Indies Head Coach Phil Simmons insists this month’s Twenty20 (T20) series against New Zealand will help to prepare a formidable unit for the 2021 World Cup.

The last time West Indies competed in the format they wrapped up a commanding 2-0 win versus hosts Sri Lanka in March, just before the novel coronavirus pandemic disrupted the global cricket calendar.

“We have to continue to build on this T20 team,” Simmons said during a virtual media conference recently in New Zealand.

“We did well in Sri Lanka, and we’re trying to add to that now and make sure everybody knows that every tour we go on we have to add something. We’re missing a few players from Sri Lanka, but we always have players coming in who can play,” he explained.

But for the New Zealand trip, Bravo was ruled out with injury, while Russell, who was player of the series against the Sri Lankans, and Simmons pulled out for personal reasons. Attacking left-hand opener Evin Lewis also withdrew, citing personal reasons and fitness concerns.

The T20 series Down Under is scheduled to begin on November 27 (Caribbean time) in Auckland, before the second and third matches, which are both set for Mount Maunganui, on November 28 and 30.

Simmons said the performances of “a few young players” in the 2020 Caribbean Premier League (CPL) indicate that they are ready to transition to the regional side.

“You want your senior players there, [and] you want them to perform, but you always have that case where there is going to be a youngster or two pushing into your squad closer to the World Cup.

“[We are] trying to sort out who are the senior players you want there, but more importantly, looking at CPL this year there are a few young players who want to put their names forward. And we’ll have quite a few games between now and the World Cup [for them] to do that,” he told journalists.

The Windies are also set to square off with the hosts in two Tests, scheduled for December 2 (Caribbean time) and 10 in Hamilton and Wellington, respectively.

The Caribbean men have not won a Test series in New Zealand since 1995. When West Indies last went there three years ago they were heavily beaten in both Tests.

On that 2017 tour, the Black Caps won the three-match T20 series 2-0 after the second encounter was rained out. The hosts swept the One-Day International series 3-0.

Though noting the conditions, which historically favour swing and seam bowling, Simmons stressed the importance of acclimatising before the start of the T20 and Test matches.

“We know that when you come here they leave a lot of grass on the wicket, but the wickets play really good. So it’s about adjusting to that… and know exactly how each and every one has to both bat and bowl on these wickets,” the head coach said.