Windies anchored to the bottom of ICC Test rankings 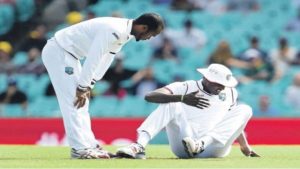 DUBAI, United Arab Emirates (CMC) —West Indies continues to languish at the bottom of the standings in the longest format of the game, while cricketers from the region have made little progress in the player rankings.

However, South Africa have moved up a few notches and their pacer Dale Steyn has stormed back to the number one position in the latest ICC rankings released on Wednesday. West Indies, who recently lost a Test series against India 2-0, remained number eight in the rankings above Bangladesh and Zimbabwe.

Their highest-ranked batsman is Darren Bravo ,who is in 28th position, while Kemar Roach at number 23 is the region’s highest-ranked bowler. Pakistan currently tops the team standings, while there were no major changes in the list for batsmen with Australia skipper Steve Smith leading the table.

Steyn reclaimed the number one position for Test bowlers after producing a match-winning performance in the Centurion Test that has helped his side complete a 204-run victory over New Zealand on Tuesday.

Steyn, who grabbed five for 33 in the second innings in what was his 26th five-wicket haul, finished with match figures of eight for 99 to regain the top slot.

Meanwhile, the 1-0 series win has pushed South Africa up two places to fifth in the team rankings, while New Zealand have slipped two places to seventh.