Home / National / WINAIR To Pull Out Of Nevis

WINAIR To Pull Out Of Nevis 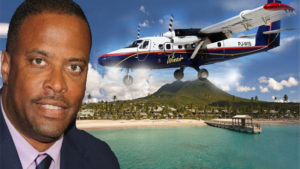 The airline currently operates several flights per week between St. Maarten and Nevis which connect via St. Kitts.

In an interview with Freedom FM Tuesday, Nevis Premier and NIA Minister of Tourism Mark Brantley said WINAIR’s decision to pull out from September 30 is unfortunate but the government is in negotiations to establish a direct flight between Nevis and St. Maarten in its stead.

“WINAIR did send a notice indicating that the current flight arrangements which go from St. Maarten to St. Kitts then to Nevis, that that is not economically feasible for them and that they wanted to discontinue that particular arrangement. We of course were surprised because we had not had any prior discussion with WINAIR, but we remember the decades-long relationship and we reached out to the WINAIR executives at the highest levels.

“We have spoken and we are now going into a series of discussions with them and what is likely to happen is that we are likely to get a St. Maarten- Nevis, Nevis- St. Maarten flight; the stop-over in St. Kitts apparently because of how they are structured was creating a difficulty and we are hopeful with a direct flight that that will make a difference. So that is where we are currently with the discussions.

“Certainly as a government we are prepared to do what we need to do to ensure that critical link between Nevis and St. Maarten continues. We have far too many of our people who travel that route, who live in St. Maarten to have that abandoned.”

He noted that this is not the first time WINAIR has indicated its intention to withdraw from Nevis, and under the previous NRP administration, former Premier Parry had to intervene in that regard. Also highlighted was the fact that the CCM-led NIA had brought several other airlines to Nevis, including Sunshine Air and Seaborne.

The Premier also addressed the challenges the Vance Amory International Airport presently faces with respect to airlift. Premier Brantley says even though there are flights available out of Nevis, Nevisians are opting to travel to St. Kitts’ RL Bradshaw International Airport, leaving the airlines to operate with only a few passengers.

“This is something we’ve seen before and we recognize of course that it is something we will have to deal with because of the choices people are making. I continue to urge people in Nevis who choose to travel that there is an option of traveling from Nevis, and if people do not use the service that is available then we can hardly argue if that service is removed.”