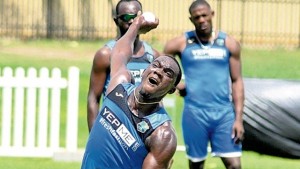 Veteran Jamaica fast bowler Jerome Taylor says despite recent challenges, he remains interested in representing the West Indies in all formats of cricket.

“I’m open to all formats of the game once I am capable and able, physically,” Taylor said after a Jamaica Scorpions practice session at Kensington Park.

“It is down to all the selectors, both [for] Jamaica and West Indies, so it’s up to them if they need my service.”

Taylor, 34, had announced his retirement from Test cricket in 2016, and expressed his desire to only play 50-over and Twenty20 cricket.

But last year he made an about -turn by declaring to Cricket West Indies that he was again available for Test selection.

However, he missed last season’s domestic four-day competition, leaving him ineligible for the regional Test side.

He was also absent from last season’s Regional Super50 tournament, but his inclusion in the Scorpions’ 14-man squad for this edition in Barbados from October 3-28 is a chance he is relishing.

“It’s a prestigious feeling, to be honest with you. Coming back is always a good feeling because this is where I started and it really means a lot. I know the pressure that comes with it, but I think I’m ready for what is expected of me.

“I’m expecting good things [but] it’s about playing each game on its merit. I’m not looking too far ahead… I just want to analyse as I go along,” he explained to the Jamaica Observer.

But his finest hour came when he took 5 – 11 to help dismiss England for 51 en route to an innings victory for the West Indies in 2009, also at Sabina Park.

He is also a capable lower-order batsman with a top score of 106 against New Zealand in December 2008.

Blessed with a natural outswinger, Taylor made his international debut as an 18-year-old against Sri Lanka in 2003, but injury — mostly related to his back — has severely interrupted his career.

After the disappointment of being overlooked for the 2018 Caribbean Premier League, Taylor took a contract with English team Somerset and helped them to the semi-final of the T20 Blast.

The time in England was just the tonic he needed.

“I wasn’t drafted to a [CPL] team, and the opportunity came to go to England and I grabbed it with both hands. I must say it was like a blessing in disguise because it was tough competition and I was able to rise above the challenge.

“In England it opened my mind to conditions, and I’m someone who has played in almost every part, but it was a good one. The intensity was very high, so not having a chance to play in the CPL, I didn’t really miss much,” the experienced speedster told the Observer.

He admitted it was a tough stint, but one that helped him to further hone his craft.

“It is cricket and you never get what you want all the time, so I use the good games to overshadow the bad ones and [I] keep on moving forward.

“The job that I had to do, I think I was fulfilling that. I was asked to pick up wickets in the front end and to see how best I could squeeze in the back. I’m happy but I’m someone who is always looking to improve each time I go out on the park. My biggest thing right now is to keep on improving mentally, physically and spiritually,” he concluded.