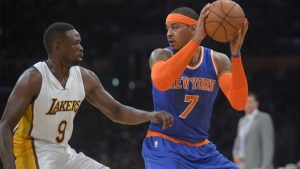 NEW YORK — This one was over early, and there was plenty of praise to go around for the Los Angeles Lakers.

Lou Williams had 22 points and Nick Young added 17 to lead seven scorers in double figures as the Lakers handed the New York Knicks an embarrassing 121-107 defeat Monday night to stop a 12-game losing streak on the road.

Julius Randle and Brandon Ingram added 14 points apiece for the struggling Lakers, who won for only the third time in 13 games overall. They had dropped 17 of their previous 18 away from home, with the only road victory during that stretch coming on Dec. 16 in Philadelphia.

“You can’t keep us down,” Young said. “We shared the ball tonight like a real player. We hit shots. Everybody got a chance to do their thing out there. It’s always good when everybody gets a chance to eat.”

It was Los Angeles’ first victory over New York at Madison Square Garden in six years.

Carmelo Anthony led the Knicks with 26 points, while Kristaps Porzingis and Brandon Jennings each had 16. Willy Hernangomez grabbed a game-high 13 rebounds.

After the Knicks scored the first four points, the Lakers went on a 20-4 spurt and never trailed again. They had a 29-19 lead after the first quarter.

“You’ve got to play for some pride,” Knicks coach Jeff Hornacek said. “You’ve got to come out there and play. These teams come in, it’s New York, so they’re going to be ready to play. If you don’t match their effort and energy, you’re not going to win. Right from the start they outhustled us.”

New York scored the first six points of the fourth but only got as close as 119-107 on Jennings’ layup with 1:28 remaining.

“It was a good, quality win. We put four good quarters together,” Williams said. “We created momentum and sustained it for four quarters.”

Justin Holiday added 14 points and Kyle O’Quinn had 10 for the Knicks.

Larry Nance Jr. and Tarik Black each had 10 rebounds for the Lakers, who outmuscled the Knicks on the boards and outrebounded them 55-40.

“We were getting everyone in the paint and hitting the glass,” coach Luke Walton said. “I thought it was the way the team approached the game.”

Knicks: Derrick Rose returned to the lineup after missing the previous four games with a left ankle sprain. He played 32 minutes and scored five points. . No Knick has played in all 53 games this season.

The Lakers had lost to the Knicks five straight times. Los Angeles had not taken a game in the series since its 127-96 victory on March 25, 2014. The Lakers hadn’t beaten the Knicks in Madison Square Garden since Feb. 11, 2011.

The game originally was scheduled to be broadcast nationally by TNT. However, the Knicks and the Lakers were bumped and the network televised the Cavaliers-Wizards game instead.

The award for best supporting player in the NBA has to go to Williams. He is the only non-starter in the league who is leading his team in scoring (18.3 points per game). “I want it to translate into wins. I don’t care about that. I’ve done this my whole career,” Williams said.

Knicks: Host the Los Angeles Clippers on Wednesday. The Clippers have won the past eight meetings since New York’s last victory in the series on April 25, 2012, at home.

Check out the team sites for the Los Angeles Lakers and the New York Knicks for more game coverage.