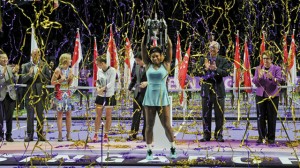 SINGAPORE (Reuters) – Serena Williams destroyed Romania’s Simona Halep 6-3, 6-0 yesterday to win the WTA Finals championship in Singapore, proving once again why she remains the most formidable force in women’s tennis.

Williams avenged her “embarrassing” loss to Halep in the group stage of the season-ending tournament with a ruthless display, overpowering her pint-sized opponent at every opportunity.

Halep shocked Williams 6-0, 6-2 in the group stage of the elite event, but was unable to repeat that performance as the American reminded everyone why she is the number one player in the world.

For Williams, it was her third successive win in the WTA Finals, second only in prestige to the four grand slams, and her fifth overall, tied for second with Steffi Graf.

Only Martina Navratilova, with eight titles, has won more, but with Williams showing no signs of slowing down at the age of 33, it is not inconceivable the American could overhaul her.

The odds were stacked against Williams winning in Singapore after she pulled out of two events in China because of a knee injury then lost to Halep in the group stages.

But, as she has shown time and time again throughout her illustrious career, Williams has a knack for raising her game when it matters, as Halep learnt the hard way at Singapore’s National Indoor Stadium.

“It was an amazing week for me so I cannot be sad that I lost,” said Halep. “Congratulations to Serena – you are the best.”

Just as she did in their previous encounter, Halep made a confident start, holding her first service game to love and putting Williams under early pressure.

She broke Williams’ second service game to lead 2-1 but failed to consolidate her early advantage as the American responded by taking her game up a notch.

Williams blasted successive aces to clinch the opening set then showed no mercy in the second, out muscling her opponent with her powerful serves, ground strokes and overhead smashes.

Halep won only seven points in the entire second set, that lasted just 25 minutes, before Williams sealed her win with her 26th winner and raised her arms in triumph as she captured her 64th career title and just over US $2 million in prize money.