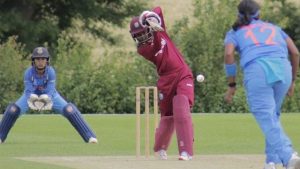 Uncapped opener Felicia Walters struck a half-century but West Indies Women’s worries increased ahead of the start of the ICC World Cup with a five-wicket defeat to Pakistan Women in their first official warm-up match here yesterday.

Sent in, the Caribbean side fought their way to a respectable 246 for seven off their 50 overs with Walters top-scoring with 59, Merissa Aguilleira getting 43 and teenaged opener Hayley Matthews chipping in with 32.

Off-spinner and captain Sana Mir was the best bowler with two for 46.

In reply, Pakistan were stumbling 63 for three in the 17th over before Nain Abidi carved out a classy unbeaten 81 and Bismah Mahroof, 75, to avert the danger and see their side to victory with 14 balls remaining in the contest at Grace Road.

Fast bowler Shamilia Connell led the Windies with two for 39.

The defeat was the fourth straight in the preparation period for West Indies Women who lost their three previous unofficial warm-up games over the last two weeks, and leaves them with little momentum heading into their opening game of the World Cup next Monday against reigning champions Australia Women.

Matthews’s early enterprise handed the Windies a solid start as the 19-year-old put on 49 for the first wicket with the more sedate Walters.

The right-handed Matthews struck four fours and six in a breezy 38-ball knock while Walters counted seven fours in 93 balls at the crease.

When Matthews strayed from her crease and was run out in the 10th over, Walters anchored small partnerships of 24 for the second wicket with Chedean Nation (7) and 35 for the third with skipper Stafanie Taylor (14).

Nation played across one from Mir and was lbw in the 16th, Taylor got a leading edge to cover off new ball bowler Kainat Imtiaz before Walters finally perished in the 31st over, caught at slip chasing a wide ball from left-arm spinner Sadia Yousuf.

On 121 for four in the 31st over and in need of a partnership, the experienced duo of Aguilleira and Dottin came together to add 49 for the fifth wicket and set up the innings for a strong finish.

Aguilleira’s knock was a busy one, containing for fours off just 50 deliveries while Dottin produced a typical cameo, facing just 26 balls and striking five boundaries. The partnership was flourishing when the pair hesitated over a quick single and Dottin was run out in the 38th over but Aguilleira added a further 40 for the sixth wicket with Afy Fletcher who made 18 before she was bowled by Mir in the 46th over.

Shanel Daley then gave the innings impetus late when she arrived to hit a quick-fire unbeaten 24 off 12 balls with a four and a six.

Pakistan were in command early at 56 for one in the 14th over before Ayesha Zafar (29) and Marina Iqbal (13) fell in the space of 29 balls with seven runs added to leave the Asian side tottering slightly.

But Abidi and Mahroof combined in a superb 141-run, fourth wicket stand which took the game away from West Indies completely.