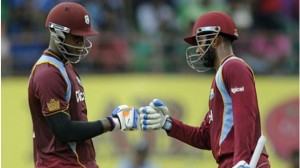 KOCHI, India – Team morale was said to be at an all-time low off the field, but when Dwayne Bravo’s men took the field in India earlier today, all that was put on the back burner.

Recalled batsman Marlon Samuels led the way with a brilliant 126 not out, as the West Indies started their tour of India with an impressive 124-run win over a shell-shocked home team.

Samuels, playing in his first ODI in seven months, teamed up with Test captain Denesh Ramdin (61) to share in a 165-run partnership from 21 overs, which allowed the West Indies to make an impressive 321in their 50 overs at the crease.

Barbadian Dwayne Smith had given the men in maroon a flying start with a T20-looking 46, and Samuels and Ramdin followed on from there.

Samuels also did some damage with the ball, taking two wickets, as in-form batsmen Suresh Raina and captain MS Dhoni both failed for India.

Twenty-four hours before, the match itself was in doubt, as West Indies players had threatened to withdraw their services for the match, amidst a dispute with their union, the West Indies Players Association. (BA)