Home / Sports / What did you think would happen to the Warriors with no Stephen Curry?

What did you think would happen to the Warriors with no Stephen Curry? 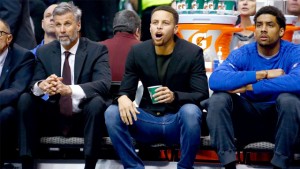 That was the score of Wednesday’s Mavericks win at home over the Warriors, a game that Curry watched from the bench in street clothes, nursing a bruised lower left leg. It was Golden State’s biggest loss in almost three years.

At least the team could have a sense of humor about it.

Of course, you can afford to laugh off a loss when it’s only your second of the season and, at 29-2, you still have the best record in NBA history through 31 games. Plus, the Warriors can be relieved to know that Curry’s leg suffered only bruising, so even if he misses Thursday’s game against the Houston Rockets, at least the injury was nothing serious.

Let’s look at the bigger picture for Life Without Curry, via ESPN.com: Including Wednesday’s blowout, the Warriors have played 460 minutes without Curry this season. In those minutes, they are at -101 in points. During the 1,043 minutes he’s been on the floor, they are +482.

Who missed Curry the most on Wednesday? Maybe his backcourt partner, Klay Thompson, who shot 4 for 15, scored 10 points and then sat out the last quarter. This continues a most noticeable statistical trend this season for Thompson. An analysis picked up by Warriors World indicates that, of all the Warriors, no one’s scoring falls off more than Thompson’s when Curry isn’t in the game.

What is the sound of one Splash Brother splashing? Drip, drip, drip?

To be fair, the Warriors also were without four other of their top nine players — including Festus Ezeli and Leandro Barbosa.