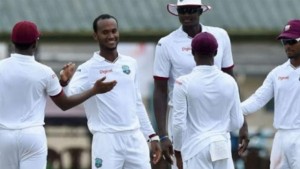 Opening batsman Kraigg Braithwaite took a six-wicket haul on Saturday to give West Indies a chance of winning the second Test against Sri Lanka at the P Sara Oval in Colombo.

And the West Indies were 20 for 1 off nine overs, when rain called an early end to the day’s play. They need a further 224 runs with nine wickets in hand to win the match.

The opening batsman has taken only three wickets in 81 first-class matches and had only one Test scalp to his name before ripping through Sri Lanka’s middle order.

The six-wicket haul gives Brathwaite the second best figures for a West Indies bowler against Sri Lanka. It falls only behind Corey Collymore’s seven for 57 at Sabina Park in Kingston, in 2003.

Captain Angelo Matthews and first Test century maker Milinda Siriwardana, propped up the Sri Lanka innings with 46 and 42 respectively and gave them hope of setting West Indies a good target to chase, until the Braithwaite intervention.

The other four wickets were shared evenly by pacer Jerome Taylor and debutant Jomel Warrican, who had taken four wickets in the first innings with his with his left-arm orthodox spin.

On a wearing wicket, that is very receptive to spin, the West Indies will now have to negotiate their first Test nemesis Rangana Herath successfully on the fourth day, to win the match.

Brathwaite fell cheaply after his heroics with the ball. He was dismissed for 3. Shai Hope is 17 not out.

“I have been working on my bowling a lot in the nets and I wanted to make a contribution to the team. I have a lot of belief in my bowling,” Brathwaite said.

“I was in the captain’s ear telling him I could get the breakthrough, as we had two left-handers at the crease. My job was (also) to keep it tight and I ended up doing very well.”

He added: “We are in this match and we believe we can win. It won’t be easy but we have to remain positive and look to rotate the strike. The key to victory is partnerships…in the dressing room we are confident.”

West Indies lost the first Test by an Innings and six runs on the 4th day at the Galle International Stadium last week.