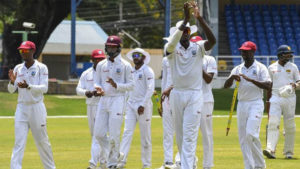 West Indies beat Sri Lanka by 226 runs Sunday in the first cricket Test with the tourists always struggling to pull off a record run chase on the final day.

Kusal Mendis was leading Sri Lanka’s ambitious push at an unprecedented 453 runs for victory and was 94 not out at the start of Day 5. But Mendis could add only eight runs before he was caught behind off Shannon Gabriel for 102 with 10 fours and two sixes.

Captain Dinesh Chandimal who retired on 15 on Saturday was out for 27. Barbadian seamer Roston Chase finished on 4-15 off 8.2 overs and legspinner Devendra Bishoo took 3-48 off 19 overs.

West Indies declared its first innings on 414-8 with wicketkeeper Shane Dowrich 125 not out, and also declared its second innings on 223-7 with Kieran Powell scoring 88. Sri Lanka’s right-arm pacer Lahiru Kumara took seven wickets in the match.

Sri Lanka was dismissed for 185 in its first innings. The second of three Tests starts Thursday at Gros Islet.