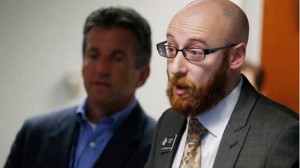 DENVER (AP) — Colorado is taking a novel approach to marijuana education — not telling people to avoid the drug, just to use it safely.

State health officials announced a new $5.7 million campaign Monday. The ads are different from previous pot-education efforts because they don’t demonize the drug.

One of the ads shows a park bench and asks people not to smoke marijuana in public. Another points out that you can’t drive a car after smoking pot — but that walking, hopping and skipping are allowed.

The print ads come in bright colors, and the radio spots have a folksy announcer with none of the ominous sound effects common to older anti-drug ads.

“This is not an aversion campaign,” Wolk insisted.

Colorado health officials have good reason to promote the brighter tone after their campaign last year aimed at teens.

The “Don’t Be a Lab Rat” effort, which included human-sized rat cages placed in downtown Denver, were criticized as repeating “Just Say No”-type messages instead of promoting responsible, moderate use.

The rat cages became targets for graffiti and derision. At one point, a downtown Denver rat cage had a waiting line of people to snap selfies inside while toking joints in violation of a public-consumption ban.

Wolk called the rat campaign “provocative” but conceded it was time for Colorado to try a new direction.

The campaign is funded by sales taxes on recreational weed. It includes flyers to be handed out at dispensaries, with targeted campaigns coming later specific to youths, pregnant and nursing women, and Latinos.

“We need to start treating marijuana like the drug it is, not the drug some fear it to be,” said Rep. Jonathan Singer, a Democrat who sponsored the legislation to tax pot and use part of the proceeds for education.