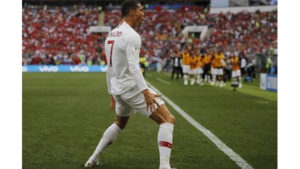 Portugal’s Cristiano Ronaldo celebrates after scoring the opening goal during the group B match between Portugal and Morocco at the 2018 soccer World Cup in the Luzhniki Stadium in Moscow, Russia, Wednesday, June 20, 2018.

MOSCOW, Russia (AP) — Cristiano Ronaldo made European soccer history by scoring in Portugal’s 1-0 win over Morocco on Wednesday, a result that makes the North African team the first to be eliminated from the World Cup.

Ronaldo’s header in the fourth minute was his fourth goal at this year’s tournament, and his 85th for his country. That put him ahead of Hungary great Ferenc Puskas and alone in second place worldwide behind Ali Daei’s 109 goals for Iran.

The Portugal forward celebrated his goal with a trademark run and soaring leap toward the corner flag at Luzhniki Stadium.

Morocco lost 1-0 for the second straight Group B match and is out of contention for a spot in the next round.

The North Africans had several chances against Portugal, nearly all from set pieces, and three of them came in a five-minute spell early in the second half. Younes Belhanda was twice denied by goalkeeper Rui Patricio’s diving saves, and defender Mehdi Benatia scooped a shot over the bar.

In injury time, Benatia lifted another shot too high with an even clearer chance.