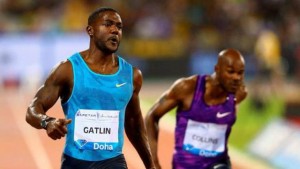 United States sprinter Justin Gatlin ran his personal best and set a world-leading time of 9.74seconds in the 100 metres at the IAAF Diamond League meet in Doha on Friday.

39 year Old Sprint Legend Kim Collins continued to defy the odds and buck the notion that 39 is to old to remain competitibe in world athletics when he became the first athlete from St.Kitts-Nevis to qualify for ALL major athletic championships for 2015 having run 10.03 seconds and placing 4th behind Gatlin, Michael Rodgers in 9.96 and Keston Bledman of Trinidad and Tobago in third.

Kim’s performance has earned him a qualifying mark for the PanAm Games, NACAC Championships, World Championships in Athletics and the 2016 Olympic Games in Rio!