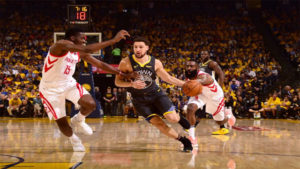 The Houston Rockets got hot from three in Game 2 vs. the Golden State Warriors.

The Warriors forced 17 turnovers and dominated the ball in a 115-109 win to take a 2-0 series lead in the Western Conference semifinals.

Golden State scored the opening bucket on an Andre Iguodala jump shot and never relinquished the lead, even though Houston threatened late, cutting a 15-point deficit to three points in the fourth quarter.

But Golden State fended off every Houston effort to gain control and ensured it would maintain home-court advantage in the marquee matchup of the playoffs.

It’s a starting lineup not seen much this season, but was effective Tuesday in a balanced effort that saw every starter score in double figures, led by Kevin Durant with 29 points, five rebounds and four assists.

Klay Thompson scored 21 and Stephen Curry scored 20 to help the Warriors overcome a night that saw the Rockets outperform them from distance.

While the Warriors hit a relatively subpar 11-of-36 (30.6 percent) attempts from behind the arc, the Rockets got hot, connecting on 17-of-40 (42.5 percent) of their long-distance shots, allowing them to close the gap in the second half.

The story of the game was almost drastically different after All-Star guards from both teams left the game with injuries early in the first quarter.

Curry suffered a dislocated middle finger on his left hand that apparently looked worse than it was.

He returned to the game after a short break in the locker room to reset the dislocation after X-rays came back negative.

Rockets guard James Harden suffered an eye injury when Draymond Green swiped him across the face while the two battled for a rebound.

He left the game for a longer stretch than Curry, but eventually returned in the second quarter and played with a laceration on his left eyelid.

“He was bleeding from the eye,” Rockets coach Mike D’Antoni told TNT.

Curry didn’t visibly suffer on the court with his injured finger, appearing unaffected in handling and shooting the ball.

Harden seemed bothered at times, seen shielding his eyes and squinting under the bright light show that is the production of an NBA game.

The series shifts to Houston for Game 3 on Saturday, with both teams presumably appreciating the time off to give their ailing superstars time to heal.