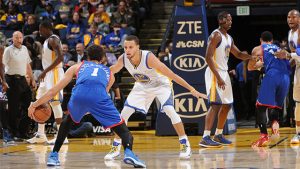 OAKLAND, Calif. — Even after a series of misses from deep where he makes his money, Stephen Curry kept letting it fly from long range.

Then, at last, the ball started falling.

Curry scored 29 points on his 29th birthday, Klay Thompson added 28 and the Golden State Warriors used a frenetic fourth-quarter rally to snap a three-game skid and beat the Philadelphia 76ers 106-104 on Tuesday night.

“It’s frustrating only because in the moment, everything feels good. You want to make shots, as a competitor and a gamer, that’s what you expect to happen,” Curry said. “It’s one of those things you just will yourself through.”

Dario Saric intentionally missed his second free throw with 2.6 seconds remaining to try to give the Sixers one last shot, but Curry secured the ball.

Curry struggled to knock down open 3-pointers again but came through from deep with 5:38 left and again with a key baseline 3 at 3:42. Matt Barnes hit one a minute later from the opposite corner for a 104-99 lead.

“He found it at the right time and he came through for us when we needed it the most,” Draymond Green said of Curry.

Curry’s jumper with 9:55 to play pulled the Warriors within 90-86 after Golden State trailed 90-78 to begin the final quarter. Green’s 3 at 8:04 made it a one-point game, and Shaun Livingston gave Golden State the lead the next time down.

Green had 20 points with 11 free throws, eight assists, eight rebounds and six blocks for the Warriors, who trailed by as many as 16 in the third.

Saric had 25 points in the Sixers’ eighth straight loss to Golden State. The Warriors’ winning streak in the series matches their longest ever, along with a stretch from Dec. 16, 1971, to March 11, `73.

“It should hurt,” 76ers coach Brett Brown said. “We put in the time, we were in a position on the road to try to get a great win.”

The Warriors aren’t worried. Thompson and others remind him of all his incredible feats.

Earlier in the day, Curry refused to call his shooting of late a slump, and coach Steve Kerr insists nobody can expect the two-time reigning MVP to match his NBA-record 402 3s last season.

“That’s what I love about Steph is that he’s never going to stop shooting and he never loses confidence,” Kerr said. “That’s the mark of a star, when it’s not your night and you still hit big shots to help your team win.”

The Warriors returned to the Bay Area following a brutal road stretch — which included losing Kevin Durant to a sprained left knee — and barely bounced back to avoid their first four-game losing streak since Feb. 26, 2013, to March 2, `13.

Golden State moved a half-game ahead of the idle Spurs for the top spot in the Western Conference.

Durant took set shots and moved around the court earlier in the day without his knee brace and soon could add jumpers. He is scheduled to be re-evaluated late this month to determine whether he might return before the regular season concludes.

76ers: The Sixers shot 56 percent in the first to stay within 35-34. … F Robert Covington started after he missed Sunday’s win at the Lakers with soreness in his right knee. … Philadelphia has lost five straight at Oracle Arena since its last win in Oakland, 104-97, on Dec. 31, 2011.

Warriors: Green became the 11th player in franchise history with 400 blocked shots. He moved past Andrew Bogut for 10th place on the franchise list. … The Warriors are 11-1 at home vs. the Eastern Conference with three in a row against the East at Oracle this week. … Curry, playing on his birthday for the fourth straight year, has scored at least 25 points on his past four birthdays.

Warriors: Host Orlando on Thursday looking for an eighth straight win vs. the Magic.

Check out the team sites for the Philadelphia 76ers and the Golden State Warriors for more game coverage.