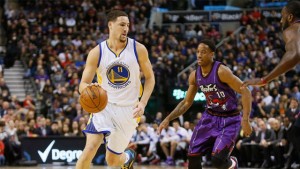 Klay Thompson (11) is averaging a career-best 21.9 points per game while shooting 44 percent from 3-point range.

OAKLAND, Calif. — Another All-Star shooter will be sidelined when the NBA’s top teams meet Wednesday night.

Thompson turned his ankle awkwardly as he stepped on Tarik Black’s foot in the third quarter of Golden State’s 108-105 win over the Los Angeles Lakers on Monday night. Thompson had his ankle re-taped in the locker room and returned in the fourth quarter, finishing with a game-high 26 points.

Hawks sharpshooter Kyle Korver is out at least another two games after breaking his nose in a win against the Lakers on Sunday. Korver went out after absorbing an offensive foul from Ed Davis.