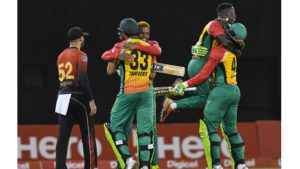 Guyana Amazon Warriors booked their place in the 2018 Hero Caribbean Premier League (CPL) final after edging past Trinbago Knight Riders by two wickets on a thrillingly tense night in Providence.

Rain throughout much of the day resulted in difficult batting conditions throughout this Playoff clash, in stark contrast to a couple of nights ago when the Warriors blitzed the same opponents with a quick-fire run-chase in the final group-stage game.

But the Warriors’ heroes from that night, Shimron Hetmyer and Sherfane Rutherford, combined again to rescue Guyana’s chase of the Knight Riders’ 122/7 from the depths of 52/5 after 12 overs.

Having got the target down to 21 from 20 balls both men then fell in successive balls to leave the game back in the balance, and when Rayad Emrit edged Dwayne Bravo to Denesh Ramdin for just a single the momentum appeared to have lurched decisively the way of the Knight Riders once more with 18 runs still needed from 13 balls and just two wickets remaining.

Romario Shepherd had other ideas, though, launching his first ball for a huge six down the ground and adding another boundary in the next over to leave the Warriors needing just four runs from the final over.

Still this extraordinary game was not quite done. Just one run came from the first four balls of Dwayne Bravo’s final over to leave the equation standing at three runs needed from two balls.

Sohail Tanvir then brought the curtain down on a memorable night’s cricket with a thumping strike down the ground for six to spark scenes of jubilation at a charged Providence Stadium.

Having seen eight overs of spin from Chris Green and Imran Tahir produce combined figures of 3/30 on a pitch offering prodigious turn, Knight Riders skipper Dwayne Bravo gambled on front-loading the run-chase with his own deadly trio of spinners.

After Ali Khan’s opening over, the next 12 overs of the Warriors innings were bowled by Sunil Narine, Fawad Ahmed and Khary Pierre. All three were magnificent, leaving the Warriors firmly on the back foot at 55/5 and needing 68 from the last seven overs.

But the moment pace came back on the ball, Hetmyer and Rutherford teed off. Thirty-four runs came from the next three overs and the target was suddenly a more manageable 34 from 24.

Another 13 came from the first four balls of Kevon Cooper’s following over but Colin Ingram’s direct hit then ran out Hetmyer by the width of a popping-crease line before Rutherford holed out to long-off from the very next ball.

The Warriors tail, though, was able to complete a job that had looked impossible when the Knight Riders’ spin trio were casting their spells.

They were even taking catches for each other and completing run outs. Fawad struck first, Cameron Delport caught on the midwicket fence by Pierre, before Luke Ronchi’s top-edged sweep found Narine.

Jason Mohammed was trapped lbw by a sharp-turning off-break from Narine, who gave up just nine runs in his four overs. Pierre then ran out Chadwick Walton for 13 after smart fielding off his own bowling before having Green – who earlier bowled so beautifully himself with the new ball to claim 2/8 from his four overs – caught by Dwayne Bravo at slip for a second-ball duck.

It had been a similar story with the bat for the Knight Riders top order, on the back foot almost from the word go after being asked to bat first and slumping to 26/4 inside the Power Play.

Having called correctly at the toss, Green had both Colin Munro and Sunil Narine caught in the cover ring after being deceived by a lack of pace from both bowler and pitch. The Aussie off-spinner bowled his four overs off the reel with the new ball with remarkable control and skill to exploit the helpful conditions.

The man who would later so memorably finish the game, Sohail Tanvir, had landed its first blow by winning an lbw decision against Brendon McCullum in the first over, while Imran Tahir was off and running for the boundary in celebration after Ramdin misread the length and was trapped plumb in front trying to sweep a very full delivery.

Ramdin was the only member of that stellar Knight Riders top four to reach double figures by virtue of three successive boundaries off Tanvir, the first two of which were pure cricket shots and the third a genuine edge placed perfectly between keeper Ronchi and Walton at a wide first slip.

Darren Bravo and Ingram attempted to rebuild, but it was careful, painstaking work as two of the biggest hitters in T20 cricket put on 48 in nine overs with just four boundaries between them. Straight after hitting the fourth of those – his third – straight back down the ground, Darren Bravo edged Tanvir to Ronchi for 24 off 33.

Ingram did manage to squirt another boundary down to third-man off the toe of the bat, but perished soon after for 25 from 26 after smacking an Emrit full-toss straight to Shepherd at long-off.

Cooper was the one Knight Rider to make batting look easy, stroking his first ball through cover for four and hitting the first Hero Maximum of the innings in the penultimate over.

Dwayne Bravo added another in the final over before falling to the final ball of the innings. He and his side must now regroup for their second shot at a place in the Final when they take on either Jamaica Tallawahs or St Kitts & Nevis Patriots in Friday’s Semi-final.