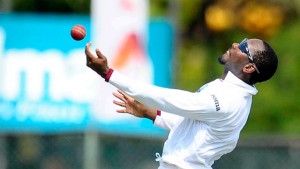 Left-arm spinner Jomel Warrican snatched his third five-wicket haul of the series as West Indies A dominated England Lions on the second day of the day/night four-day “Test” here Tuesday night, to enhance their chances of a clean sweep in the three match series.

The 25-year-old picked up six for 33 as Lions, resuming from their overnight 20 without loss, were bundled out for a disappointing 102 in their first innings, to extend their wretched batting woes in the series.

Haseeb Hameed top-scored with 48 but was just one of three batsmen in double figures and the only one to pass 20.

Armed with a lead of 134 runs, Windies A finished the night on 157 for four in their second innings – 291 runs ahead heading into Wednesday’s penultimate day at the Vivian Richards Cricket Ground.
First innings top-scorer Shamarh Brooks again got a start with 37 while Jahmar Hamilton continued his decent form with an unbeaten 36 and captain Kieran Powell, 28.

Chasing a relatively modest target for first innings lead, captain Keaton Jennings and Hameed extended the Lions opening stand to 38 before being separated.

The left-handed Jennings had scored 16 from 53 deliveries when he fell lbw to left-arm seamer Raymon Reifer and Nick Gubbins lasted 18 balls before he too departed lbw, trapped by off-spinner Rahkeem Cornwall (3-46).

Seven balls later with the score on 52, Warrican claimed his first wicket when he sent back Joe Clarke, lbw without scoring, confirming the collapse which saw the last seven wickets tumble for 50 runs.

With his latest heroics, Warrican took his haul in the series to 26 wickets while Cornwall now has 17.

Batting a second time, Windies A were handed a solid start by Powell and fellow left-hander John Campbell (22) who added 54 for the first wicket.

Powell had struck two fours and a six in a breezy 36-ball knock when he was lbw to 20-year-old off-spinner Dominic Bess (3-45), leading to a slide where three wickets perished for 19 runs.

Brooks then combined in a 54-run, fourth wicket stand with Hamilton, to keep Windies A on top.

The right-handed Brooks faced 64 balls and counted five fours while Hamilton has so far struck five boundaries in a 75-ball stay at the crease.