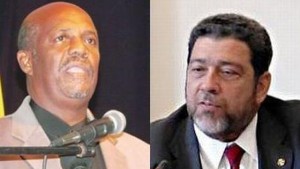 KINGSTOWN, St Vincent — After weeks of campaigning, Vincentians vote for a new government on Wednesday, as the ruling Unity Labour Party (ULP) seeks an historic fourth term in office.

A total of 89,527 voters in 15 constituencies are eligible to exercise their franchise across St Vincent and the Grenadines.

The polls will open at 7am and close at 5pm.

Some 43 candidates from four political parties will seek to gain the approval of the electorate in an attempt to form the next government.

Both the ULP of Prime Minister Dr Ralph Gonsalves and the main opposition New Democratic Party of opposition leader Arnhim Eustace are fielding a full slate of 15 candidates.

The Democratic Republican Party of Anesia Baptiste and the Green Party led by Ivan O’Neil will field six and seven candidates respectively.

The ULP will be seeking an historic fourth consecutive term against the backdrop of the nation’s first major international airport nearing completion, claimed revolutions in education and housing and prudent fiscal management amidst harsh economic times.

However, the NDP has chided government spending while making promises of its own, including a new hospital, jobs for young people and better infrastructure.

A recent CADRES poll predicts a comfortable victory for the ULP with neither the DRP nor the Green Party making a significant impact.

Electoral missions from CARICOM, OAS and the Commonwealth are observing Wednesday’s poll.