Venus & Serena through to semi-finals 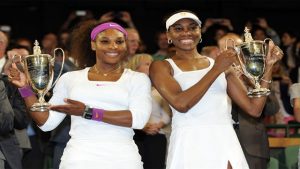 “We don’t really talk too much about it but we are playing doubles later, so we are just happy to be in the semi-finals,” Serena told BBC Sport. Asked about a potential final meeting, she added: “It will be great. Venus is such a tough opponent I want her to win so bad – not in the final if I am there, but if I’m not, I do.”