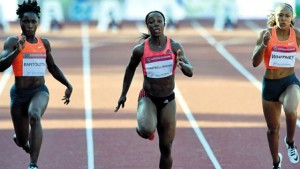 WORLD and Olympic champion Veronica Campbell Brown ran her first sub-11-second 100m for the season as she won the women’s event at the Istvan Gyulai Memorial in Budapest, Hungary, yesterday, clocking 10.99 seconds running into a head wind of -1.2 metres per second.

She was the only Jamaican winner at the event named in honour of the former IAAF general secretary as Omar McLeod failed to complete the men’s 110m hurdles in his first professional outing, after picking up a cramp.

Campbell Brown, who was third in both sprints at the recent JAAA National Senior Championships at the National Stadium, got out of the blocks fast and ran away from the field for a comfortable win as American Tianna Bartoletta was second in 11.18 seconds, just edging South Africa’s Carina Horn in 11.19 seconds.

The 110m hurdles was supposed to be a match-up between the two fastest men in the event so far this year with Cuba’s Orlando Ortega, who ran 12.94 seconds in Paris on Saturday up against McLeod, who ran 12.97 seconds at the Jamaican Senior Trials a week earlier.

McLeod, however, pulled up mid-way the race after he felt a cramp, the Jamaica Observer has learnt, while Ortega hit a hurdle and finished sixth in 16.04 seconds, walking across the line.

Russia’s Sergey Shubenkov, who set a new national record 13.06 seconds in Paris on Saturday, won in 13.27 (-1.9m/s) ahead of Americans Jason Richardson in 13.35 seconds and world record holder Aries Merritt in 13.40 seconds.

World leader Jason Morgan was ninth in the discus with 60.32m in his third meet in Europe in a week after competing in Nancy, France, last Tuesday, and Paris on Saturday.

Shevon Stoddart was sixth in the women’s 400m hurdles in 56.06 seconds as Georganne Moline of the USA won in 54.60 seconds, beating her compatriot Cassandra Tate in 55.06 seconds, with Ukraine’s Hanna Titimets third in 55.61 seconds.