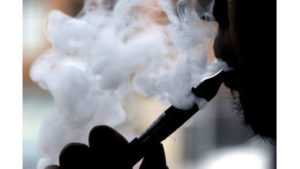 MONTEGO BAY, St James — Worried that vaping is becoming too commonplace in Jamaica, including among high school students, the Ministry of Health and Wellness is mulling a ban on the practice, similar to action taken by some American states where it has been blamed for a number of deaths.

Health and Wellness Minister Dr Christopher Tufton disclosed that already he has instructed Chief Medical Officer Dr Jacquiline Bisasor-McKenzie to scrutinise the data coming out of the United States with an aim to assess and consider the most-severe possible outcome.

“We are very concerned and we have been observing very closely the information coming out of the US, both at the federal and the state levels, where vaping is becoming very common and is now being suspected for a number of deaths, and as a consequence a number of states have taken the position to ban the practice,” Dr Tufton told journalists in Montego Bay Friday.

“I have asked the chief medical officer in the ministry to examine the reports that are coming out of those jurisdictions and to assess the clinical side of that information with the intention of, in the worst-case scenario, doing similar to what was announced in terms of a ban, but at least if not, for the time being, offering an advisory or warning to those who offer this particular type of product or practice,” Dr Tufton said.

He also expressed concern that vaping — the inhaling of a vapour created by an electronic cigarette (e-cigarette) or other device —is becoming common among secondary school students.

“The other concern as it relates to vaping for us is among the younger population because it is becoming a common practice in our high schools. We have heard and seen and gotten evidence of a number of cases,” bemoaned Dr Tufton.

He said that his ministry intends to forge a partnership with the Ministry of Education to address the issue of vaping in schools.

“The ministry is looking at that, with the intention of having discussions with the Ministry of Education to see what extent the protocols within the schools can be adjusted to monitor more closely the possibility of the practice taking place, and take whatever action necessary to stamp it out. But it is a major concern — I am certainly concerned about it. And as you know, from a public health perspective we do not support any form of smoking,” Dr Tufton said.

The death toll in the United States from illnesses linked to e-cigarette use has risen to at least 19, health authorities said a week ago, and more than 1,000 people have suffered lung injuries probably linked to vaping.

Officials have yet to identify the cause for the outbreak, which dates back to March, and are pursuing multiple lines of investigation, according to a report from Agence France Presse.

A report by clinicians in North Carolina last month pointed to the inhalation of fatty substances from aerosolised oils, but a new study by the Mayo Clinic found patients’ lungs had been exposed to noxious fumes.

The US Centers for Disease Control (CDC) and Prevention said 18 deaths in 15 states had now been positively linked to vaping, from a total of 1,080 cases of people sickened — a jump of 275 since week before last.

Connecticut officials also announced the first death in the state, bringing the total to at least 19.

The CDC attributed the sharp increase to a combination of new patients becoming ill in the past two weeks and recent reporting of previously identified patients.

Meanwhile, Jamaica’s National Council on Drug Abuse (NCDA) urged Jamaicans earlier this month to desist from using e-cigarette or vaping products, as investigations into both continue.

According to NCDA, in 2018 vaping among teenagers and young adults exploded and large numbers of young people (smokers and non-smokers) started using e-cigarettes.

NCDA added that a double-digit percentage of Jamaican youth confirmed that they use or have used a form of vaping product, and almost 44.2 per cent of youth stated that the use of these products helps people feel more comfortable at celebrations, parties and social gatherings.

But the NCDA said a recent rise in acute lung illnesses linked to vaping has deepened concerns about the safety of the devices.

Despite several unknown chemicals in the vape, the NCDA noted that the act of vaping can already be linked to acute illnesses, symptoms, and issues such as brain damage, nicotine addiction, raised heart rate, raised blood pressure, deteriorating asthma conditions, chest pains, coughing and wheezing — and in extreme cases, even death.

“With the ease of accessibility to these products by youngsters as they are marketed as ‘safe’ alternatives to using combustible cigarettes, it can be inferred that these products — often containing attractive flavours — are targeting our youngsters to use them, often leading to an addiction. We see that this addition to nicotine may eventually lead to the use of combustible cigarettes. This is a worrying trend and must concern us and all Jamaica when considering the health and safety of our youth,” NCDA’s CEO Michael Tucker said.