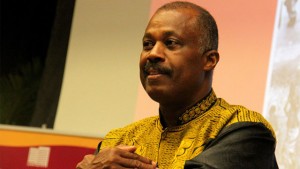 WASHINGTON DC, United States, Monday September 21, 2015 – Vice-Chancellor of The University of the West Indies Professor Sir Hilary Beckles has received the Global Community Healer Award, a humanitarian award from the Community Healing Network (CHN), for his tireless work in trying to secure reparations for people of African descent.

He is the second recipient of the award, the first being American author, poet, dancer, actress, and singer Maya Angelou who was also the founding chairperson of the Board of Advisors of the CHN, a global grassroots movement aimed at uplifting black communities.

Sir Hilary, who is chairman of the Caribbean Community (CARICOM) Reparations Committee, received the humanitarian award during the Network’s First Annual Global Emotional Emancipation Summit hosted as part of the 45th Annual Legislative Conference of the Congressional Black Caucus Foundation.

The summit, held under the theme ‘Taking Control of Our Destiny: Confronting the Deadly Mindset at the Root of the Devaluing of Black Lives’ brought together leaders of African ancestry from around the world to focus on valuing black lives.

Sir Hilary said he felt honoured to participate in the summit and commended the organizers for “focusing on the root causes of anti-black racism around the world and on the institutional and systemic structures of white supremacy”.

“Now is the time for an honest and open public discourse on the social, economic, and psychological legacies of racism, slavery, colonialism and segregation. The time has come to repair the damage and heal the historical wounds that have been inflicted on people of African ancestry across the globe,” he said.

Sir Hilary was in the United States on a September 13 to 19 trip aimed at strengthening The UWI’s global presence and impact.