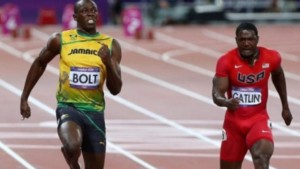 Gatlin, 33, who has served two drugs bans in his career, has ran the four fastest times of the year over 100m.

Briton Campbell told BBC Radio 5 live that a Gatlin victory would put the “spotlight” on athletics.

“The spotlight will be truly on the sport and the sport will have to make a decision.

“It’s not a decision about throwing out Justin Gatlin, but about how do you [athletics] want to be perceived in the future?”

The meeting between Gatlin and Jamaica’s six-time Olympic champion Bolt, 28, in Beijing is highly anticipated.

Gatlin, the 2004 100m Olympic gold medallist, set a personal best of 9.74 seconds at the age of 33 in May, but Bolt made an encouraging return from a pelvic injury as he won at the Anniversary Games in 9.87secs.

The International Association of Athletics Federations, the sport’s world governing body, is defending itself from allegations of widespread doping in the sport.

The Sunday Times published data from 5,000 athletes, which it says reveals an “extraordinary extent of cheating”.

The IAAF said the blood results were not positive tests or proof of doping.

Lord Coe, an IAAF vice-president, said the introduction of blood passports had “chased some of the highest-named athletes out of our sport”.

Gatlin was banned for two years in 2001 and then again in 2006, originally for eight years rather than life after agreeing to help the US Anti-Doping Agency, but that was reduced to four years.