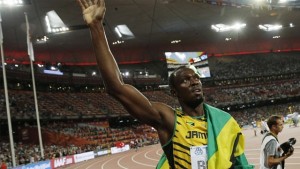 The AIPS said that in a year dominated by athletics feats and tennis dominance, Bolt and American tennis star Serena Williams were voted the best athletes this year by a panel of sports journalists from 91 countries.

Bolt, regarded as the fastest man on earth, secured 804 votes in the AIPS Best Athlete poll, followed by Djokovic with 774 votes, and Argentina and FC Barcelona’s Messi with 380 votes.

The Jamaican is a record five-time winner of the AIPS Best Male Athlete award.

He is the reigning 100m and 200m world champion and was also part of the Jamaican team that won the 4x100m relay at the IAAF World Championships in Beijing earlier this year. He is the first man to hold both the world records for the sprints, is an 11-time world champion, and has six Olympic medals.