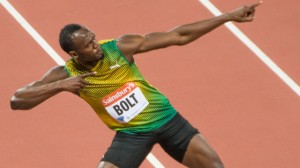 PUMA’s latest ad campaign urged Twitter users to enter the hash tag #Foreverfaster which would allow them to get an automatic personalized message signed by Bolt along with a few other top brand ambassadors of the footwear giant.

But the campaign soon backfired as Twitter hacks soon realized the messages were based on profile details and began making subtle alterations to to make it appear as if Bolt along with other stars including footballer Ramadel Falcao, were sending crude, offensive messages.A photograph that appeared to be autographed by the world’s fastest man was changed to read: “I’m erect. Forget the pack. Follow your instinct.”

The ad hacking comes as Bolt set a new world indoor record in the 100-m in Saturday night in Poland by clocking 9.98sec to win the race. The previous record for indoors was 10.05 seconds, which was set by Namibian runner Frankie Fredericks in 1996. This makes Bolt the first runner to ever break the 10 second barrier for the indoor race. He is also the world record holder for the 100m outdoors with 9.58 seconds.