Home / Regional / US To Step Up Deportations Of Haitians

US To Step Up Deportations Of Haitians 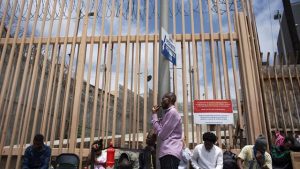 The United States government, responding to an extraordinary wave of Haitian migrants seeking to enter the United States, said today that it would fully resume deportations of undocumented Haitian immigrants.

After an earthquake devastated parts of Haiti in 2010, the United States suspended deportations, saying that sending Haitians back to the country at a time of great instability would put their lives at risk. About a year later, officials partly resumed deportations, focusing on people convicted of serious crimes or those considered a threat to national security.

But since last spring, thousands of Haitian migrants who had moved to Brazil in search of work have been streaming north, mostly by land, winding up at American border crossings that lead to Southern California.

Few have arrived with American visas, but nearly all have been allowed to enter the United States because immigration officials were prohibited, under the modified deportation policy, from using the so-called fast-track removal process often employed at the border for new, undocumented arrivals.

Instead, the migrants were placed in a slower deportation process and released, with an appointment to appear in immigration court at a later date, officials said. Since early summer, most have been given permission to remain in the country for as long as three years under a humanitarian parole provision, immigrant advocates said.

With the full resumption of deportations, which took effect this morning, Haitians who arrive at the border without visas will be put into expedited removal proceedings.

Jeh Johnson, the secretary of homeland security, said in a statement that conditions in Haiti had “improved sufficiently to permit the U.S. government to remove Haitian nationals on a more regular basis.”

While his statement did not mention the recent influx of Haitians along the southwestern border, Homeland Security officials, during a conference call with reporters, cited the migrant wave as the other key factor in the administration’s decision.

An additional 4,000 to 6,000 Haitians were thought to be still making their way from Brazil, immigrant advocates in San Diego and Tijuana said, based on estimates from shelters along the Brazil-to-Mexico migration route.

The message to those Haitians from the Obama administration, however, seems clear: Turn around or go elsewhere.

An uptick in deportations might not occur immediately. Removals require the cooperation of and paperwork from the receiving country, and Homeland Security officials said they were still in negotiations with the Haitian government about the policy shift.

In the meantime, officials said, nearly all Haitians stopped at the border and scheduled for accelerated deportations would be put into detention centres.

Officials clarified, however, that asylum law would continue to apply to newly arriving Haitians. A migrant who feared returning to Haiti because of the threat of persecution or torture would be interviewed to determine whether that fear was credible. If an immigration officer determined it was, the immigrant could apply for asylum.