Home / Regional / US official cautions Jamaica on ganja legalisation: US not comfortable with Jamaica’s push to decriminalise weed 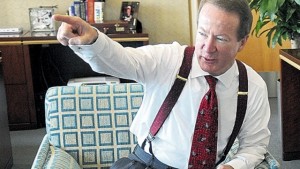 BROWNFIELD… Jamaica must be mindful of international drug treaties

WASHINGTON, DC, USA — The United States Government has signalled some discomfort with Jamaica’s move to decriminalise marijuana for specific uses.

According to assistant secretary of the Bureau of International Narcotics and Law Enforcement Affairs (INL), William R Brownfield, there is a possibility that the move could increase inflows of marijuana from Jamaica that now accounts for 80 per cent of ganja illegally smuggled into that country.

Brownfield said that, while the US must be tolerant of national policies to combat the illicit trade of ganja, Jamaica must be mindful of international drug treaties to which it is a signatory.

Brownfield was responding to a question concerning last Friday’s tabling of the Dangerous Drugs (Amendment) Act, 2015 in the Jamaican Senate, which seeks to, among other things, decriminalise ganja for medicinal, religious, and personal uses. With the amendments, the possession of small quantities of ganja, amounting to two ounces or less, will become a non-arrestable offence. The Bill also seeks to reform the monetary penalties laid down by the Act.

“…With or without the legalisation of ganja, the decriminalisation of ganja… the importation of ganja into the US remains against the law and the issue then is how much impact will legalisation or decriminalisation have on that. And, I can assure you that, from the US side, we will continue to pursue maximum efforts to prevent any import in the United States and we will request and expect complete co-operation from law enforcement authorities of the Government of Jamaica in eliminating this sort of trafficking,” Brownfield told journalists Tuesday.

Jamaica has largely been viewed by the US as a hub for the cultivation of ganja and a popular transit route for drugs originating in South America — a point that was emphasised strongly by Brownfield during a meeting at the State Department in Washington, DC.

Brownfield cited extensively the three drug-related international treaties of 1961, 1971, and 1988 that codify internationally acceptable control measures to prevent the trafficking of narcotics while ensuring their availability for scientific and medicinal purposes.

“Jamaica like all… countries of the world does have to address [their concerns], within their own realities, but at the same time accept that they have ratified and, therefore, have a legal obligation to abide by the terms of the three international drug conventions,” Brownfield said, even as he acknowledged that the posture of the US has somewhat changed with the legalisation of ganja in the federal district of Washington, and the states of Colorado, Oregon, and Alaska.

“I would not necessarily walk down the same road that the governments of the states of Colorado, Washington, Oregon and Alaska have elected to do. I would not necessarily walk down the same road that some in the Government and Parliament of Jamaica are choosing to walk. That said, my position was quite clearly stated in the beginning; we must have tolerance and accept that different countries will address their drug issues in different ways so long as they are committed to the fundamental purposes of the three international conventions and that is to reduce the damage, to reduce the harm and eventually to reduce the abuse of these products, including cannabis, or marijuana, or ganja to the citizens of the world,” Brownfield emphasised, pointing out that the conventions have some degree of flexibility as to how countries address their domestic drug issues.

Jamaica, he said, finds itself in a peculiar position, having to deal with the problem of ganja cultivation as well as being a transit route.

“Other Caribbean states also produce some form of cannabis; Jamaica has greater name recognition and greater reputation, I suppose, for the quality of its product as well as the quantity of its product. So [Jamaica], in a sense, has a more unique set of problems and challenges than do most other Caribbean states in that most of the other states of the region are dealing with the impact of trafficking, external forces who move their products through their nation or their maritime or airspace en route to market in a third country…,” he said.

“Jamaica deals with another set of problems as well… Some very competent, very talented, very skilled agricultural experts in Jamaica also produce a very high-quality cannabis, which is used both for domestic consumption and there the opportunity presents itself for exports to other markets as well, so Jamaica has to deal with both problems in that regard. [Jamaica has] to deal with one set of problems in terms of being a producer nation… and it has to deal with the impact of being a transit nation as well,” Brownfield added.

Jamaica’s Senate will tomorrow begin debate on the ganja reform Bill, which seeks to amend the Dangerous Drugs Act of 1948. The last amendment to that Act took place in 1987.