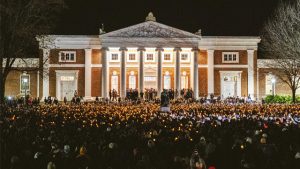 A 22-year-old student at the University of Virginia was charged with fatally shooting three members of the university’s football team and wounding two others as they returned from a class field trip on Sunday night, an attack that led to an overnight campuswide lockdown while the authorities searched for the gunman for roughly 12 hours.

The three killed in the shooting — Devin Chandler, Lavel Davis Jr. and D’Sean Perry — were juniors, remembered by classmates, coaches and teachers as affable students, dedicated activists and, as the university’s first-year coach, Tony Elliott, said in a statement, “incredible young men with huge aspirations and extremely bright futures.”

As tributes to the victims poured in from around the country, questions proliferated about the fellow student accused of killing them: Christopher Darnell Jones Jr., a former football player who two months earlier had come to the attention of a university task force formed to identify and respond to threatening behavior by students.

Brian Coy, a university spokesman, said that on Sept. 15, amid an investigation into some hazing incidents on campus, officials with the university’s department of student affairs “heard from a student that Mr. Jones made a comment to him about possessing a gun” — a remark, Mr. Coy added, that was not made in conjunction with a threat. No one whom officials spoke with, including Mr. Jones’s roommate, said they had seen him with a gun, Mr. Coy said.

But in the course of the investigation, officials discovered that Mr. Jones had been convicted of a misdemeanor concealed weapons violation in 2021, for which he received a 12-month suspended sentence and had to pay a $100 fine.

It was one of several misdemeanor charges that Mr. Jones had been charged with over the past few years, according to court records. He was obligated by campus policy to report the concealed weapons conviction to the university, but did not. When university officials tried to question him about it, Mr. Jones refused to cooperate, Mr. Coy said, and the task force, called a threat assessment team, “escalated his case for disciplinary action” before a student judiciary body on Oct. 27. The authorities said the matter was pending.

It was not immediately clear who was representing Mr. Jones, and no representative could be reached on his behalf by late Monday.

At a news conference on Monday morning, Timothy Longo, chief of police for the University of Virginia, said Mr. Jones would be charged with three counts of second-degree murder and three counts of using a handgun in the commission of a felony.

Minutes later, Chief Longo was briefly pulled aside by another law enforcement official, returning to the microphone with an announcement: Mr. Jones had just been arrested by the police in Henrico County, Va., in the Richmond suburbs, about an hour and fifteen minutes away.

“The search for the suspect may be over, but the work of understanding this terrible crime and what motivated him to commit it is just beginning,” said James E. Ryan, the president of the university, in an afternoon email to the students announcing that classes would be canceled on Tuesday, as they were on Monday.

The shooting in Charlottesville was at least the fifth since February on or near college campuses in Virginia alone. President Biden and the first lady, Jill Biden, sent their “deepest condolences” to the families, friends and neighbors grieving the victims and the injured.

“Too many families across America are bearing the awful burden of gun violence,” the White House said in a statement, once again calling for an assault weapons ban “to get weapons of war off America’s streets.”

The shooting happened shortly after 10 p.m. on Sunday night, the police said, as a bus pulled into a university parking garage at the end of a school field trip to Washington. According to Michael Hollins Sr., whose son, Michael Hollins Jr., was injured in the attack, the students on the trip were in a drama class that had gone to see a play.

Mr. Jones was among the students on the bus.

It is still unclear how the attack began, but the police said the bodies of Mr. Perry and Mr. Chandler were found on the bus. Mr. Davis died from his wounds at a hospital.

On Monday evening, the details of the night’s toll spread across a campus already reeling from a long night of fear and confusion. About a hundred people gathered and sang hymns shortly after sunset at St. Paul’s Memorial Church. Some at the vigil had spent much of the previous night locked down in a building on campus. Later, as a cold night set in, hundreds of students and staff members came together on the South Lawn of the university, carrying flowers and electric candles. Players from the football team stood together on the steps at one end of the lawn, weeping loudly and embracing one another.

Mr. Jones came to the university from Petersburg, a city south of Richmond, where he grew up in public housing with three younger siblings, according to a profile of him that ran in The Richmond Times-Dispatch on the eve of his graduation in 2018. The profile described him as an ambitious but at times angry student, who struggled after his parents divorced when he was 5. He made top grades, earning scholarships, multiple academic awards and a membership in the National Honor Society, but along the way he was regularly disciplined for getting into fights.

“People would say, ‘You’re too smart to be doing something like that,’” Mr. Jones told the news outlet. “But it’s because of where I was at. Sometimes I’m not in a good head space. Fighting at first was my only way of relieving stress.”

Antoine Brown, 22, who played football with Mr. Jones at Petersburg High School, remembered him as a “good student, good player, good person to be around,” and the only one from his graduating class who had gone on to enroll at the University of Virginia.

“You would have thought he was one of the ones who was going to get out of the city and make it,” Mr. Brown said.

At Virginia, Mr. Jones was listed as a running back in the football team’s 2018 media guide, but he never saw playing time.

Mr. Davis, a friendly, soft-spoken junior from South Carolina, was a starting wide receiver and the third-leading pass receiver on the team this season; he caught two touchdowns. He was majoring in African American studies and was active in the Groundskeepers, a group formed by members of the Virginia football team to work toward racial justice in a city that became a site for the worst kind of violent bigotry when neo-Nazis descended for a rally in July 2017.

Devin Chandler, a junior wide receiver, had yet to appear in a game at Virginia, having recently transferred from the University of Wisconsin. In a statement, the Wisconsin interim head coach, Jim Leonhard, called him “a joy to be around.”

At Virginia last year, Mr. Chandler took a course called Culture of Hip-Hop. Jack Hamilton, the professor, remembered him as notably funny and genial. “He used to come to my office hours,” Dr. Hamilton said. “He was just an incredibly nice guy.”

D’Sean Perry was a junior reserve linebacker from Florida who played in six of the team’s 10 games so far this season. Michael Haggard, a lawyer for his family, said in a statement that Mr. Perry’s parents, Happy and Sean, would not speak publicly at this time “as their grief is only beginning, and out of respect for the University of Virginia community which has been terrorized by another mass shooting in the United States.”