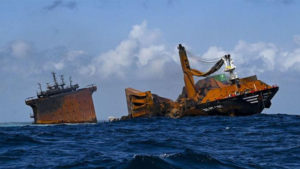 The sinking of a burning cargo ship carrying harmful chemicals and plastics off the coast of Sri Lanka has caused “significant damage to the planet” through the release of hazardous substances into the ecosystem, the UN said Saturday.

Driving the news: The ship, the X-Press Pearl, caught fire on May 20 and burned for almost a month before finally sinking on Thursday, AP reports.

Get market news worthy of your time with Axios Markets. Subscribe for free.

Billions of plastic pellets washed up on the Sri Lankan coastline in the weeks that followed.

Sri Lanka’s Marine Environment Protection Authority said on June 12 that over 1,000 tons of debris has been collected from beach cleanup operations stretching across 200 kilometers of coastline.

Experts had feared an oil spill from the 300 tons of bunker oil fueling the ship, but so far there has been no signs of a spill, per AP.

The big picture: A U.N. team of oil spill and chemical experts sent from the European Union will be working with the Sri Lankan government to assess the impact of the environmental disaster, per the press release.

Sri Lanka has also submitted an “interim claim of $40 million to X-Press Feeders to cover part of the cost of fighting the fire,” per AP.

What they’re saying: “The UN is coordinating international efforts and mobilizing partners to support Sri Lanka in addressing the disaster of the MV X-press Pearl, based on a request by the Government,” said UN Resident Coordinator in Sri Lanka Hanaa Singer-Hamdy.

“An environmental emergency of this nature causes significant damage to the planet by the release of hazardous substances into the ecosystem, this in turn threatens lives and livelihoods of the population in the coastal areas,” she added.