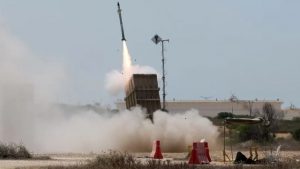 The Ukrainian government sent a letter to Israeli officials asking them to provide their Iron Dome air defense system for use against Russian drone attacks, Axios reported Tuesday.

“In order to ensure the protection of peaceful population, Ukraine makes an official offer to Israel to initiate the practical mutual cooperation in the field of air/missile defense,” the Ukrainian Embassy in Israel wrote in the letter, a copy of which was obtained by Axios.

Ukraine also asked Israel for support in training its soldiers.

Designed to track and intercept short-range surface-to-air missiles, the Iron Dome could prove particularly useful against Iranian-made drones and ballistic missiles that Russia has begun to use against civilian targets.

Ukraine’s request comes as Iran has reportedly reached a deal to send additional weaponry to Russia, including “kamikaze” style drones that can nosedive directly into targets, causing massive damage. Ukraine reiterated this deal in its letter, writing, “According to available information … there is a high probability of prompt deliveries to Russia of Fateh-110 and Zolfaghar ballistic missiles from Iran.”

The letter claimed Iran would continue to develop additional weaponry for Russian use, and said Russia’s use of the country’s weapons “will significantly contribute in strengthening Iran’s potential of producing offensive weapons and as a result, increase the security threats for Israel and the Middle East.”

Israel confirmed to Axios that they’d received the letter, but declined to comment further. The country has provided Ukraine with humanitarian aid, but has shied away from sending weapons or defense systems.