U.N.C. Charlotte Student Couldn’t Run, So He Tackled the Gunman 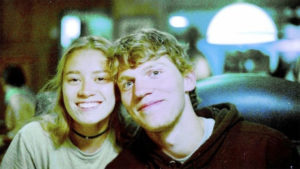 In an alert that flashed across computer and phone screens all over campus, the instructions were spare but urgent: “Run, Hide, Fight. Secure yourself immediately.”

But Riley Howell could neither run nor hide. The gunman was in his classroom. So, the authorities said, he charged at the gunman, who had already fired several rounds, and pinned him down until police officers arrived.

“But for his work, the assailant may not have been disarmed,” Chief Kerr Putney of the Charlotte-Mecklenberg Police Department said of Mr. Howell, who was shot in the process and among six victims of a mass shooting at the University of North Carolina at Charlotte campus Tuesday evening. “Unfortunately, he gave his life in the process. But his sacrifice saved lives.”

On Wednesday, students and teachers were still reeling from the attack that left two students, including Mr. Howell, dead and four others injured. Chief Putney said the death toll could have been far worse had Mr. Howell, a 21-year-old former high school soccer goalie, not intervened.

“He is my hero,” said Mr. Howell’s girlfriend of nearly six years, Lauren Westmoreland, who said she was overcome with grief. “But he’s just my angel now, as well.”

The police identified the gunman as Trystan Andrew Terrell, 22, and said he had been charged with two counts of murder and four counts of attempted murder. The authorities said the handgun used in the shooting had been purchased legally.

Chief Putney declined to discuss the suspect’s motive and also would not say whether any of the students in the crowded classroom had been targeted. But, he said, the building was familiar, and the choice to focus on it “intentional.”

Students said Mr. Terrell had attended classes at U.N.C. Charlotte, but also said that he appeared to have disappeared from classes in recent months.

The attack Tuesday evening was the latest in a string of mass shootings at educational institutions across the country that have left parents, police and school administrators grappling with how to stanch the violence. It came, too, on the heels of an attack at a California synagogue last weekend and the recent 20th anniversary of the Columbine shootings.

The shooting punctured what had been a celebratory graduation week at one of the largest schools in the University of North Carolina system, a leafy, often sun-drenched campus built on old farmland about 10 miles northeast of uptown Charlotte. About 30,000 students attend classes in its red brick buildings.

On Tuesday, the final day of classes, students were looking toward exams and graduation. LBST 2213, a class that examines the anthropology and philosophy of science, was scheduled to meet at 5:30 p.m. in Kennedy Hall.

Adam Johnson was teaching, and his students were planning to give group presentations. According to a description of the class, the students had spent the semester examining critical philosophical questions, such as: What is science? What is evolution?

Miranda Finch, 20 and a sophomore, sat at a large circular table, watching a group presentation about the galaxy. Her group, which had planned to deliver a talk on lobotomies and electric shock, was next.

Then she heard three loud pops. She said she wasn’t sure what the sound was — she had never before heard a gunshot.

She hadn’t heard anyone come into the classroom, so she wasn’t sure whether the attacker entered quietly or just stood up from the table closest to the door.

But there he was, pointing a gun.

Tristan Field, a 19-year-old sophomore, said the gunman began shooting about 10 minutes into class. It was quiet, he said, until violence broke out and people began to scream and run away.

Mr. Field said it was the silence beforehand that stood out to him the most on Wednesday. “Only the presentation video was playing, and then suddenly, shots and chaos,” he said.

One bullet grazed a cheek of Ms. Finch’s friend. Another boy at their table slumped on the floor. Then a bullet hit a third person. Three of the four people wounded in the shooting had been sitting at that table, about 20 feet from the door, Ms. Finch said. They were all in her group, waiting to give their presentation.

Ms. Finch and her friend crawled behind a table. For a moment, she said, she crouched there, terrified that the gunman would come looking for them.

Ms. Finch didn’t notice Mr. Howell lunge at the gunman, but she said it could have happened while she was ducking behind the table. The next thing she knew, the gunman was lying on the floor.

“That was the weird thing,” she said. “He just came in and shot, and then he stopped shooting, and then he didn’t say a word at all.”

Ms. Finch and her friend ran out of the classroom and into a building across the street. Ms. Finch’s friend sat down inside, crying.

“She asked me to look at her hip, and when I looked, it was the first time I had ever seen it, it was definitely a gunshot wound,” Ms. Finch said. She applied pressure until help arrived. And then she went home covered in blood.

Mr. Field was also among those who ran away. In a tweet after the ordeal, he tried to process what had happened. “Why here?” he wrote. “Why today? Why U.N.C. Charlotte? Why my classroom? What did we do?”

The six people who were killed or wounded were all students at the university, officials confirmed. In addition to Mr. Howell, of Waynesville, N.C., Ellis R. Parlier, 19, of Midland, N.C., also was killed.

Mr. Howell had considered a career in the military or firefighting before enrolling at the university, where he was an environmental studies student. In a statement, his parents said he was a fearless athlete with a sturdy frame who relished a challenge, “whether it be jumping from the highest cliff into the water below or power lifting competitions at the gym.”

“Once committed to something,” they said, “he never gave up, never gave in, and gave everything he had.”

Mr. Parlier, who was known as Reed, graduated in 2017 from the Central Academy of Technology and Arts, a magnet high school in Monroe, N.C., where he studied computer technology, according to a spokeswoman for the Union County Public Schools. He aspired to develop video games. In his free time, he tutored Charlotte middle school students.

The attack came during a particularly turbulent decade for Charlotte, North Carolina’s largest city and a banking hub hit hard by the Great Recession. Over the last 10 years, it has seen a mayor resign over corruption charges, rioting over a police officer’s killing of a black man, and been at the center of a political battle over transgender rights.

In a news conference, the city’s mayor said that over the years, she has heard mayors across the country talk about the impact of mass shootings in their cities. On Wednesday, it was her turn.

“We know a tragedy like this can divide a community or bring us together,” said Mayor Vi Lyles, a Democrat. “It is our choice of how we move forward.”

On Wednesday, the university — typically lively and festive — felt “dull and emotionless,” said Devin Chase Martin, 23, a student who had attended a history class with Mr. Terrell but did not know him personally. At an evening vigil, about 7,500 people, mostly students, packed into Halton Arena, where the 49ers play basketball, to grieve. Gov. Roy Cooper and other state and local officials attended.

Some students, unsure how the attack was unfolding Tuesday, spent hours hiding in classrooms before they realized they were safe. They, too, spent Wednesday recovering.

Philip L. Dubois, the university’s chancellor, said the school would continue with graduation ceremonies that are scheduled to begin this weekend. One of the students who was injured, Ms. Houpt, is among those set to graduate, and Mr. Dubois said she would cross the stage.

But final exams were canceled until Monday morning, he said, adding that the school would be flexible with students who might not be ready to study and take tests.

Before the attack, Wednesday had been set aside as a study day to prepare for exams. Normally, the school’s library and student union would have been “bustling to cram for exams,” said Brooke Davidson, 19. Yet both buildings felt virtually deserted.

“There is a sense of somber — of sadness here,” she said.

Ulani Robinson, 19, a freshman, was still recovering from the three-plus hours she said she spent cowering in a dark classroom with other students on Tuesday.

That night, she said, “we slept only because our bodies made us sleep.”

“I tossed and turned,” she added, “but my mind never rested.”