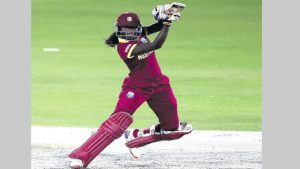 ST JOHN’S, Antigua (CMC) — Two uncapped players have been named in a squad of 18 to attend a training camp in Jamaica next month, ahead of the One-day International (ODI) home series between West Indies Women and England Women.

Erva Giddings, a 30-year-old all-rounder from Guyana, and Akeira Peters, a 22-year-old medium pacer from Grenada, have been asked to attend the camp which runs from September 16 to 30.

The bulk of the training outfit comprises members of the squad which won the Women’s World Twenty20 trophy, the likes of Merissa Aguilleira, Deandra Dottin, Stafanie Taylor, and Anisa Mohammed.

The camp will also mark the return of left-handed all-rounder Shanel Daley to the fold following a near two-year absence, due to a knee injury. “We are happy to welcome back Shanel. She was one of the top ODI and T20I bowlers in the Caribbean and was also highly rated in the ICC Women Players’ Rankings,” said Courtney Browne, chairman of the Selection Panel.

“Shanel brings a wealth of experience back to the squad and will highly challenge for a place in the final 13.”

The series against England Women comprises five ODIs, the last three of which will count towards the ICC Women’s Championship to be contested between October 8 and 19 at the Trelawny Multiplex and Sabina Park in Jamaica.

The ICC Women’s Championship is a multi-year, bilateral competition between the top eight international women’s sides that will lead to automatic qualification for the top four teams to next year’s ICC Women’s World Cup to be hosted by the England & Wales Cricket Board.

“The squad of 18 comprises members of our Women’s World Twenty20-winning squad, along with other talented players from the recent Regional Women’s Tournament played in Guyana,” said Browne. “The Selection Panel will reduce the squad to 13 at the end of the training camp, as we look forward to a highly competitive series against England Women”.

The Windies Women are currently second in the standings on 20 points — four behind current ODI World champions Australia Women — and one ahead of England Women. They are due to complete their schedule of ICC Women’s Championship matches in November on the road against India Women.