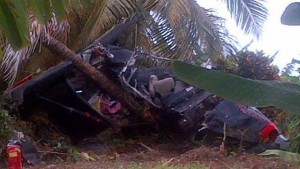 KINGSTOWN, St Vincent, Tuesday May 12, 2015 – Two men survived, reportedly suffering only soft tissue injuries, after the small private plane they were flying in crashed in Georgetown, on the windward side of St Vincent, yesterday.

They were on board a Cessna C-337 Skymaster on their way to Carraicou from St. Lucia when the plane went down after 2:30 p.m.

A man who said he saw the crash told I-Witness News that the plane seemed to have lost power and was gliding before it clipped some trees and went down.

Leon Yearwood, a security officer at the Langley Park Airstrip, said he rushed to the scene to help the crash victims, assisted by other residents.

Another man, who did not want to be named, told the online news site that by the time he arrived, one of the men was already out and people in the community came out and “did a good job in saving the [other] guy’s life”.