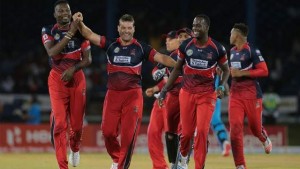 A superb innings of 80 not out from Darren Bravo set up an easy victory for the Trinidad and Tobago Red Steel over table topping Barbados Tridents in the Hero Caribbean Premier League. Bravo was in superb touch as he struck 11 boundaries including seven sixes in his 44 ball stay at the crease. The target of 185 was always going to be tough for the Tridents, but a four over opening spell that claimed two wickets and cost just 20 runs from Samuel Badree made it an impossible task as the Red Steel won by 72 runs.

The Red Steel’s highest opening stand of this year’s Hero CPL gave them an excellent foundation on which to build. The South African pair of Jacques Kallis and Cameron Delport put on 49 runs in 48 deliveries before Delport lost his wicket to the spin of Ashley Nurse. The left-hander smashed a huge six that was brilliantly caught one handed in the crowd, winning the spectator US$1000US. Delport was caught at short third man the very next ball for 29 (28).

The Red Steel reached 66-2 off the first 10 overs of their innings as they kept wickets in tact but they could not find a way to accelerate in the face of some excellent spin bowling from Peterson and Ashley Nurse. Kallis further extended his lead as the Red Steel’s leading run scorer on his way to 49 (43), his highest score of this season, but it was Darren Bravo that was the star of the show.

He made his way to 80* off 44 balls in a brilliant display of brutal hitting that helped guide his team to 184-3, their best batting performance so far this year. Bravo’s innings was paced superbly as he struck seven Hero Maximums on the way to his highest CPL score.

The last over of the Red Steel innings from Ravi Rampaul went for 25 runs as Darren Bravo combined with his brother Dwayne to set an extremely challenging total for the Tridents to chase.

The Barbados innings didn’t get off to the best of starts. They lost opener, Dwayne Smith, for a run a ball 13 when he was bowled through the gate by a Samuel Badree googly that he failed to read.

Ashley Nurse was promoted up the order in a pinch hitting role in an attempt to regain some impetus but the move was not a successful one. He was bowled by a perfect Kallis yorker having made 12 from 13 balls.

Badree claimed his second with another googly, this time the man to be deceived was Sri Lankan opener, Dilshan Munaweera, who charged past the ball to be dismissed stumped for 10.

Pakistan Test captain, Misbah-ul-Haq, made a duck on his Tridents debut in the last match. Here he made it to 19 before he was brilliantly caught by Delport low down in the deep.

That wicket brought the Tridents talismanic captain to the crease. Kieron Pollard is the Tridents’ leading run scorer this year and as he walked to the crease with his side in trouble at 65-4 they needed a big effort from the big man.

It was not to be, he fell for just two runs when he dollied a catch back to Derone Davis who claimed 2-22 on his CPL debut.

Once they had lost their skipper there was no way back for the Tridents as they stumbled to 112 all out. Dwayne Bravo was the man that finished off the lower order to finish with figures of 3-16.

This defeat opens things up at the top of the table with the Tridents only one point clear of the chasing pack. As we enter the last week of the tournament it is possible for five of the six teams to finish in first place to qualify automatically for the final. The Red Steel are still bottom of the league, but if they win their last three matches they will finish top and get that spot in the final.

The Tridents are still well placed to make the playoffs, but this defeat means that their final standing will depend on results elsewhere.