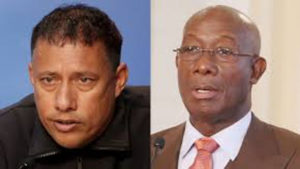 Police Commissioner Gary Griffith yesterday called on Prime Minister Dr Keith Rowley to retract his statements regarding the Bayside Towers incident, saying it was all about race and colour.

In an interview with journalist Dominic Kalipersad on i95.5 FM, Griffith was asked, based on his statements, whether he felt the PM was getting “worked up” over the issue because of race. He responded: “Definitely. I am saying it point-blank.”

He was responding to statements made by the Prime Minister during a news conference on Saturday at which Rowley said it cannot be different strokes for different folks and called upon the TTPS to enforce the law across the board.

“It is not for me to tell the Commissioner of Police who to arrest or who not to arrest and how to apply the law. But as Prime Minister I could tell the Commissioner of Police that the law must be applied to protect us in Trinidad and Tobago, from those who are not prepared to listen and are not prepared to fight the fight to bring this virus under control,” Rowley stated.

He was making clear reference to last week’s pool party at Bayside Towers in Cocorite in which there were approximately 40 people in attendance but no arrests were made.

Griffith questioned why Rowley did not raise the same alarm when some 27 young men were found by police bathing at a public beach against public health regulations and were not arrested.

Those persons were actually breaking the law, and had tried to evade police by running and hiding in bushes, he said.

Griffith said this was the reason that the boys were made to lie on the ground, photographs of which had appeared in some newspapers.

Hearkening back to the fact that boys were not eventually arrested, Griffith said, “Why the Prime Minister didn’t mention that?”

He later stated of the PM: “That shows hypocrisy. That is not democracy.”

Griffith said “everything” is about race, colour, religion and politics and “we live on that in this country”, where there was no looking at the facts or “right and wrong”.

Earlier in a media release, Griffith had taken aim at Rowley, accusing him of making the police “the fall guy” after the Government itself created unclear and ambiguous public health regulations only to later insinuate that police officers were failing to do their jobs in accordance with those flawed regulations.

“In effect, the TTPS (Trinidad and Tobago Police Service) was thrown under the proverbial bus,” Griffith said.

Griffith said the TTPS was disappointed in the statements made by the Prime Minister, pointing out that police officers stand ready and committed to enforce all laws passed by the Government. However, as it relates to potentially abusing the rights of individuals or acting illegally, the Police Service will not do so simply to “satisfy public or political pressure,” he said. The Commissioner also issued a separate statement to all divisional commanders, ordering them to advise all officers to ignore Rowley’s statements, adhere to their oaths of office and carry out their duties within the law.

The issue at hand is the uncertainty as to whether police officers were allowed, under Covid-19 Regulations, to enter private properties without search warrants and charge people with being in breach of the regulations if they gather in numbers exceeding five.

Griffith stated that the Police Service had sought and received several legal opinions on the issue and is comfortable that with the current interpretation of the law which is officers were not allowed to do so. He said if the Government wished to have enforcement of the regulations on private properties and inside people’s homes, it needed to amend the legislation or provide new legislation that would allow the police clear and unambiguous authority to do what Rowley has insinuated should be done.

“The Prime Minister, as the most experienced politician in the Government, should know that the amendments to the law cannot be done through press conferences. The PM should know that any changes to the constitutional rights of citizens should be done through Parliament. His Attorney General should so advise him of this. If we respond to incidents like the one at Bayside and simply start arresting people there would be hundreds of lawsuits against the State for wrongful arrest since no law would have been amended to reflect this,” he said.

Griffith went on to add that the current construction of the law does not diminish a person’s constitutional rights as a whole and, in particular, their rights to the enjoyment of their property.

“This makes for a difficult judgment call on the part of the TTPS. For instance, if 20 owners of property at Bayside Towers, or any other gated community, were at the common area pool relaxing, is it being suggested we should enter the compound and arrest them all for violating the Covid-19 regulations simply because they number more than five?

“The TTPS recalls that the number established by the Ordinance at the time of the general election was ten yet we heard no outrage at that time when ALL political parties were pushing the limits of the law. And in those instances, there was no question of private versus public space. We did then what we did in Bayside; caution persons!”

The Commissioner went on to ask whether the Bayside issue was regarding the number of people who had gathered, the fact that it was a party, whether a video of it surfaced on social media or the fact that those in attendance were perceived as being rich.

“As the TTPS, we respond to breaches of the Public Health Ordinance. We don’t respond to perceptions of race, creed, or class. The average citizen can only enter Bayside if invited. Someone invited those people there. Bayside Residential Association has it within their rules to control these issues among themselves.

“They are the communal owners of that property. In this particular case, it was the very neighbours inside Bayside that called to complain, and TTPS responded. By the time we arrived, we saw nothing in terms of numbers or activities consistent with what was shared on social media,” he stated.

Griffith said he accepted that with the Covid-19 pandemic, things cannot proceed as normal since “one person’s silly actions can have a damaging effect on the entire population”.
But at the same time, he said the police service must balance the competing interests of the Public Health Regulations and the constitutional rights of citizens and officers try to do so as evenly as possible.

“Since the beginning of the ‘lock-down’, we have consistently taken the approach to warn and persuade ahead of arrest. The suggestion that somehow persons at one location have gotten privileges that others haven’t gotten is ridiculous, misinformed, and dangerous, and only inflames an already delicate situation.

“The solution to this matter lies in the hands of the Government of Trinidad and Tobago and not the police,” he said. —with

The commissioner said the type of approach the Prime Minister is calling for is reminiscent of the illegal arrests of the 2011 state of emergency, is obscene and, if pursued, would cost the State millions of dollars in damages and legal costs after successful suits.

“If the PM was genuine in his claims that no one is above the law and all should be dealt with equally, he would not put the TTPS to be the fall guy by giving us the power to arrest those from humble resources who swim in public spaces but prevents us from taking action on those who commit similar acts in the haven of luxurious pools in private property which we have been given no power to arrest such fortunate individuals,” he stated.