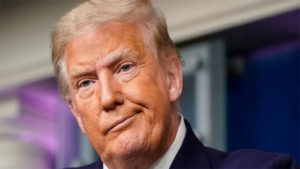 First, he said he was “working and cooperating with” government agents who he claimed had inappropriately entered his home. Then, when the government revealed that the FBI, during its search, had recovered nearly a dozen sets of documents that were marked classified, he suggested the agents had planted evidence.

Finally, his aides claimed that he had a “standing order” to declassify documents that left the Oval Office for his residence and that some of the material was protected by attorney-client and executive privilege.

Sign up for The Morning newsletter from the New York Times

Those are the ever shifting explanations that former President Donald Trump and his aides have given regarding what FBI agents found last week in a search of his residence at Mar-a-Lago in Palm Beach, Florida.

Trump and his allies have cast the search as a partisan assault while amplifying conflicting arguments about the handling of sensitive documents and failing to answer a question at the center of the federal investigation: Why was he keeping documents, some still marked classified, at an unsecured Florida resort when officials had sought for a year to retrieve them?

The often contradictory and unsupported defenses perpetuated by Trump and his team since the FBI search follow a familiar playbook of the former president’s. He has used it over decades but most visibly when he was faced with the investigation into whether his campaign in 2016 conspired with Russians and during his first impeachment trial.

In both instances, he claimed victimization and mixed some facts with a blizzard of misleading statements or falsehoods. His lawyers denied he had tied his administration’s withholding of vital military aid to Ukraine to Trump’s desire for investigations into Joe Biden and his son, Hunter.

When information contradicting that defense emerged in a forthcoming book by Trump’s former national security adviser John Bolton, Trump’s lawyers switched to insisting that he hadn’t connected the aid to the investigations, but that if he had, it wouldn’t have been an impeachable offense.

Of the multiple investigations Trump currently faces — including a state inquiry in Georgia and two federal grand jury investigations, all related to his efforts to cling to power at the end of his presidency, as well as civil and criminal inquiries in New York related to his company — the federal investigation into his handling of sensitive documents taken from the White House has emerged as one of the most potentially damaging.

A search warrant made public Friday revealed federal agents had recovered top secret documents when they searched Trump’s Florida residence earlier in the week as part of an investigation into possible violations of the Espionage Act and other laws.

Among the 11 sets of documents taken were some marked as “classified/TS/SCI” — shorthand for “top secret/sensitive compartmented information,” according to an inventory of the materials seized in the search. Those types of documents are meant to be viewed only in secure facilities. The inventory of documents included other material, some described as “confidential.”

The stunning revelation made clear the gravity of the Justice Department’s inquiry months after the National Archives and Records Administration said it had discovered classified information in documents that Trump had held onto after leaving office.

“What he doesn’t have the right to do is possess the documents; they are not his,” said Jason Baron, a former director of litigation at the National Archives for more than a decade. “There should be no presidential records at Mar-a-Lago, whether they are classified or unclassified or subject to executive privilege or subject to attorney-client privilege.”

Documents covered by executive privilege are meant to be kept within the government.

A spokesperson for Trump did not respond to a message seeking comment.

Trump used Hillary Rodham Clinton’s mishandling of classified material, as seen in a Justice Department investigation into her email practices in 2015 and 2016, as political fodder during his first campaign. He is considering another national campaign for 2024, and questions about whether he mishandled the nation’s secrets could be problematic for him, even absent an investigation.

After officials with the National Archives tried for several months to retrieve material from Trump, he turned over 15 boxes of documents in January. The next month, the National Archives confirmed the discovery of the classified information and referred the matter to the Justice Department.

Over the following months, officials came to learn that Trump still had additional material at Mar-a-Lago that some of his advisers urged him to hand over.

Trump described the handover of the 15 boxes as “an ordinary and routine process.” But administrations have been required to turn over documents to the National Archives before leaving office for more than 40 years, as part of the Presidential Records Act that was created in response to President Richard Nixon’s attempt to take his documents and recordings with him after resigning in disgrace.

Kash Patel, a former Trump administration official, subsequently justified the handling of the documents by saying Trump had declassified them before leaving office — a claim echoed by Trump last week.

In an appearance on Fox News on Friday night, right-wing writer John Solomon, one of Trump’s representatives for interacting with the National Archives, read a statement from the former president’s office asserting Trump had a “standing order” during his presidency that “documents removed from the Oval Office and taken to the residence were deemed to be declassified the moment he removed them.”

That claim would not resolve the investigation. Two of the laws referred to in the search warrant executed last week criminalize the taking or concealment of government records, regardless of whether they had anything to do with national security. And laws against taking material with restricted national security information are not dependent on whether the material is technically classified.

Bolton, who served as Trump’s third national security adviser over 17 months, said he had never heard of the standing order that Trump’s office claimed to have in place. It is, he said, “almost certainly a lie.”

“I was never briefed on any such order, procedure, policy when I came in,” Bolton said, adding he had never been told of it while he was working there and had never heard of such a thing after. “If he were to say something like that, you would have to memorialize that, so that people would know it existed,” he said.

What’s more, he pointed out, secure facilities for viewing sensitive material were constructed at Trump’s clubs in Florida and New Jersey, where he often spent weekends as president, meaning that the documents wouldn’t need to be declassified. And if they were declassified, Bolton said, they would be considered subject to public-record requests.

He added: “When somebody begins to concoct lies like this, it shows a real level of desperation.”

The claim that the documents held in the Florida residence were declassified also undercut an assertion one of Trump’s lawyers made in June. In a written declaration, the lawyer’s team said all material marked as classified and stored at Mar-a-Lago had been returned to the government.

Last week, Trump again accused the Justice Department of acting as a tool for his political opponents, a familiar tactic for a former president who had tried repeatedly to politicize the department during his four years in office. Describing the FBI as corrupt, Trump suggested that its agents had planted incriminating material at Mar-a-Lago during the search, and he demanded they return documents that he said were protected by executive privilege.

Such accusations of political motivation prompted Attorney General Merrick Garland to defend the bureau’s agents during brief remarks last week. Trump’s unverified accusations also came as the FBI and the Department of Homeland Security last week issued an intelligence bulletin that warned of an increase in threats against federal law enforcement after the search of Mar-a-Lago, including general calls for a “civil war” or “armed rebellion.”