Home / International / Trump to be left off 2020 ballots unless he shows his tax returns, Washington State says

Trump to be left off 2020 ballots unless he shows his tax returns, Washington State says 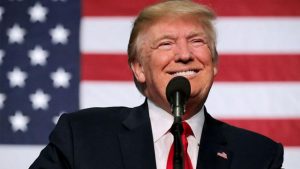 Donald Trump’s name will not appear on voting ballots in Washington State if the president fails to release his tax returns ahead of the 2020 elections.

Lawmakers in the Washington State senate approved major legislation this week that would legally require all presidential candidates to release the last five years of their personal tax returns in order to have their names featured on both primary and general voting ballots.

The 28-21 vote margin advances the bill to the northwestern state’s House of Representatives.

However, top officials warned the law could face an uphill legal battle despite its apparent constitutionality.

“The disclosure requirement you propose is likely constitutional,” Washington’s attorney general and solicitor wrote in a letter to the state senate, who noted the legislation “would definitely be challenged in court”.

The bill was co-sponsored by Democratic lawmaker Patty Kuderer, a state senator who said political norms surrounding tax return disclosures have been all but discarded under Mr Trump.

“Although releasing tax returns has been the norm for about the last 40 years in presidential elections, unfortunately we’ve seen that norm broken,” she said, according to CBS.

Washington isn’t the only state passing legislation to codify standard practices surrounding tax disclosures for presidential candidates after Mr Trump famously declined to provide his during the 2016 election, citing an alleged audit.

There is nothing stopping a presidential candidate from releasing their tax returns amid an ongoing audit.

New Jersey has also advanced a similar bill to the state’s general assembly that would force candidates to disclose their recent tax returns.

Republicans argued the forced disclosure were creating a precedent that could cause problems at general elections.

“We’re on really risky ground when we’re trying to place conditions on a federal election,” Hans Zeiger, a Washington Republican, said this week.