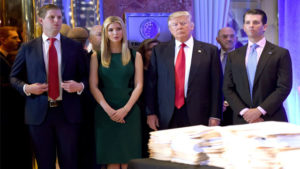 President Trump, his three eldest children and his private company filed a federal lawsuit on Monday against Deutsche Bank and Capital One, in a bid to prevent the banks from responding to congressional subpoenas.

In the suit, filed in federal court in Manhattan, the president and his family members argue that the Democratic House committee leaders who issued the subpoenas engaged in a broad overreach.

“This case involves congressional subpoenas that have no legitimate or lawful purpose,” the suit alleges. “The subpoenas were issued to harass President Donald J. Trump, to rummage through every aspect of his personal finances, his businesses and the private information of the president and his family, and to ferret about for any material that might be used to cause him political damage. No grounds exist to establish any purpose other than a political one.”

The House’s Intelligence and Financial Services Committees issued subpoenas to Deutsche Bank, a longtime lender to Mr. Trump’s real estate company, and other financial institutions two weeks ago, seeking a long list of documents and other materials related to Deutsche Bank’s history of lending and providing accounts to Mr. Trump and his family. People with knowledge of the investigation said it related to possible money laundering by people in Russia and Eastern Europe.

Representative Maxine Waters of California, the chairwoman of the Financial Services Committee, and Representative Adam B. Schiff of California, the chairman of the Intelligence Committee, called the lawsuit “meritless” in a joint statement, and said it demonstrated “the depths to which President Trump will go to obstruct Congress’s constitutional oversight authority.”

“As a private businessman, Trump routinely used his well-known litigiousness and the threat of lawsuits to intimidate others, but he will find that Congress will not be deterred from carrying out its constitutional responsibilities,” they said. “This lawsuit is not designed to succeed; it is only designed to put off meaningful accountability as long as possible.”

The suit appears to be part of an increasingly aggressive counteroffensive by Mr. Trump’s administration and his business empire to thwart attempts by House Democrats to investigate him and his presidency. In a statement, Marc Mukasey and Patrick Strawbridge, the lawyers who filed the suit, said, “Every citizen should be concerned about this sweeping, lawless invasion of privacy.”

In the suit, they argue that a lack of legislative purpose to the subpoenas makes them illegal.

“‘Oversight’ and ‘transparency,’ in a vacuum, are not legitimate legislative purposes that can justify subpoenaing a private citizen,” the suit says. “For more than a century, in fact, the Supreme Court has been quite ‘sure’ that neither the House nor Senate ‘possesses the general power of making inquiry into the private affairs of the citizen.’”

Kerrie McHugh, a Deutsche Bank spokeswoman, said, “We remain committed to providing appropriate information to all authorized investigations and will abide by a court order regarding such investigations.”

Capital One representatives did not immediately respond to a request for comment.

The suit provides a glimpse into some of the details that the congressional committees hoped to glean about Mr. Trump’s finances, as well as their strategy to blur the lines between Mr. Trump as president and as private citizen.

Among the entities that Congress members have sought documents from is Mazars USA, the president’s longtime accounting firm. On April 22, Mr. Trump filed a suit to prevent Mazars from responding to a subpoena from Representative Elijah E. Cummings of Maryland, the chairman of the House Oversight and Reform Committee.

But Deutsche Bank holds one of the biggest troves of documents.

Starting in the late 1990s, it was the only mainstream financial institution willing to consistently do business with Mr. Trump. Other Wall Street banks shunned him after a series of defaults and bankruptcies saddled them with hundreds of millions of dollars in losses.

Starting in 2011, the Trump relationship was handled by the private-banking division of Deutsche Bank, which caters to the ultrawealthy. That division dispensed more than $300 million of loans to Mr. Trump and his companies, making Deutsche Bank his largest creditor. The bank also was an important lender to Mr. Trump’s son Donald Jr. and to the family of his son-in-law, Jared Kushner.

According to the suit, officials from the president’s company, the Trump Organization, tried but failed to get information about the subpoenas from congressional officials.

They learned from Deutsche Bank that the request included financial information related to “parents, subsidiaries, affiliates, branches, divisions, partnerships, properties, groups, special purpose entities, joint ventures, predecessors, successors or any other entity in which they have or had a controlling interest,” according to the suit.

The bank had intended to begin responding on May 6, the suit says.