Trump bashes Spike Lee for ‘racist hit’ on him at Oscars 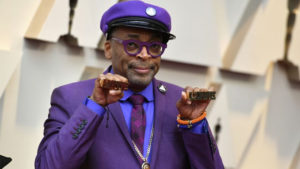 President Trump on Monday lashed out at Spike Lee after the director urged viewers to vote him out of office during Sunday night’s Academy Awards.

Trump tweeted that it would “be nice if Spike Lee could read his notes, or better yet not have to use notes at all, when doing his racist hit on your President, who has done more for African Americans (Criminal Justice Reform, Lowest Unemployment numbers in History, Tax Cuts,etc.) than almost any other Pres!”

Lee, who had been nominated five previous times, took the stage to accept the Oscar, his first ever, for Best Adapted Screenplay for “BlacKkKlansman” with several pages of prepared remarks. He honored Black History Month and thanked his grandmother — who he said saved up 50 years of Social Security checks to help put him through film school — before turning to politics and the upcoming presidential election.

“The 2020 presidential election is around the corner,” Lee said. “Let’s all mobilize, let’s all be on the right side of history. Make the moral choice between love versus hate. Let’s do the right thing!”

Lee has long been critical of Trump, whom he often refers to as “Agent Orange.”

In 2018, the director used his promotional tour for “BlacKkKlansman” in part as a platform to blast the president over his response to the deadly white supremacist rally in Charlottesville, Va.

“The president of the United States had a chance to denounce hate,” Lee said on CNN last summer. “The whole world saw what happened, and he didn’t do it.”

Lee said that Trump has given the “green light” to racists through his rhetoric.

“Since [Trump] has gotten into the White House it is not even a dog whistle, it’s a bullhorn,” he said.