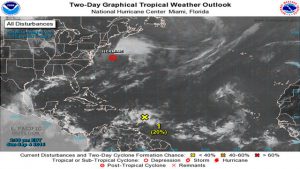 PHILIPSBURG:— The National Hurricane center predicted in its 2pm advisor on Sunday that A tropical wave, accompanied by a broad area of low pressure, is moving across the Lesser Antilles. This wave continues to produce a large area of showers and thunderstorms and gusty winds.

Significant development of this system appears unlikely while it moves westward at 15 to 20 mph across the Caribbean Sea during the next several days. Regardless of whether or not development occurs, this wave will continue to produce locally heavy rainfall and gusty

winds over portions of the Lesser Antilles through early Monday and should spread over Puerto Rico and Hispaniola during the next couple of days. 6pm UPDATE At 6pm forecasters predicted that the tropical wave will pass south of St. Maarten and will not pose any serious threat to the islands.

At the time Dominica and Guadeloupe were having heavy rainfall. While it is expected that rain along with some wind gusts with thunder and lightning will affect St. Maarten during the night on Sunday and probably Monday. Residents are asked to remain vigilant as changes in projections could take place. As such Monday will be a normal working day even though it might be rainy.

September 5th is the 21st anniversary of Hurricane Luis, the last hurricane that devastated St. Maarten.