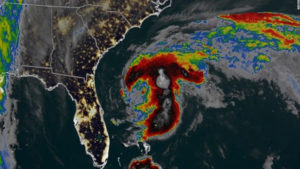 Two weeks before the official start to Atlantic hurricane season, Tropical Storm Arthur has become the first named storm of the year — but it’s expected to brush the US coast before heading back out to sea.

At 8 p.m. Sunday, Arthur’s outer bands were skirting the North Carolina coast, the National Hurricane Center said. A tropical storm warning was in effect for Surf City north to Duck, an area that includes the Outer Banks barrier islands, meaning tropical storm conditions are expected sometime in the next 24 hours.
Heavy rain, dangerous coastal surf conditions and rip currents are expected in the warning area, the hurricane center said.
Arthur was about 260 miles south-southwest of Cape Hatteras, North Carolina, moving toward the state at around 9 mph, the National Hurricane Center said in its 8 p.m. advisory.
“A turn toward the northeast with an increase in forward speed is forecast to occur later tonight or on Monday,” the NHC said. “A turn toward the east is expected on Tuesday.”
The storm’s center is forecast to stay “well offshore of the coasts of Georgia and South Carolina” Sunday night and move near or just east of the North Carolina coast on Monday, the hurricane center said.
Arthur is forecast to turn away from the United States on Monday night and into Tuesday