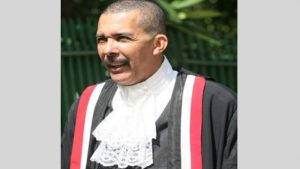 PORT OF SPAIN, Trinidad (CMC) — Trinidad and Tobago yesterday celebrated its 54th anniversary of political independence from Britain with the traditional military parade and Prime Minister Dr Keith Rowley telling citizens “we have a very bright future ahead of us”.

No one, however, will this year receive the country’s highest award, the Order of the Republic of Trinidad and Tobago, according to a statement released by the Office of the President. In his Independence Day message, President Anthony Carmona paid tribute to the athletes who represented the country at the just concluded Rio Olympics.

“We must remember always that this Independence that we gloriously celebrate is historically grounded in a deep sense of patriotism, and so, in the spirit of patriotism, we must salute our Rio 2016 athletes for their own representation and patriotism at the Games, for their grit, determination and heart.”

He said that patriotism must neither be “selective, convenient nor transient, and that it equally translates to our triumphs, as to our setbacks. “No great nation was ever built on success alone. Such is a fallacy, an empirical anomaly. As a nation, we have hurdles to cross. The key is to recognise and confront them and galvanise the appropriate inclusive solutions.”

Prime Minister Rowley, in his first-ever Independence Day message, said that there are still questions that needed to be answered 54 years after lowering the British Union Jack.

“Fifty-four years later we must ask ourselves, how have we used our independence? Yes we may be considered an economically buoyant and a politically stable country. We generally enjoy excellent bi-lateral relations with our Caricom (Caribbean Community), Latin American and international neighbours and partners. But have we really matured as a people?”

He acknowledged that the celebrations this year comes at a challenging time when international developments are seriously impacting the national economy. “We are all aware of the fall in oil and gas prices, the resources upon which our country is heavily dependent for needed revenue. We find ourselves at a crucial point in our development when we are being asked to make some tough choices.

“But I always feel assured of the strength of our people to navigate these turbulent waters. Our capacity for innovation, our understanding of international events, our creativity and our characteristic sense of humour will triumph over any adversity we may face. I have faith in our ability to rise to the task of building a better Trinidad and Tobago,” he said.

Rowley said the aim now, both as residents and non-resident nationals, should be to build on the achievements to enable the country to remain on a steady path of sustainable development.

“We have a great deal of challenging work ahead of us, but nothing worth achieving may be attained without dedication and hard work. We have a very bright future ahead of us; of this I am certain. We will tackle our challenges head on, together. We have to take care of every aspect of this country…our political and democratic institutions, our physical environment, and most of all we have to take care of each other.”

Opposition Leader Kamla Persad-Bissessar, in her message, said Independence must not be taken lightly.

“The journey to where we are today did not begin at Marlborough House. It started with the indigenous survivors of colonial genocide, and continued with the African survivors of Transatlantic slavery, and the Chinese, Indian and others who survived indentureship. All of them across our history remain the heroes who helped build what we have today.”

IT is a promise that out of the ashes of colonial degradation, we would rise as nation charged with the responsibility to look after one another in sisterhood and brotherhood, and the fatherhood of God.

“Independence is a promise that the wealth and beauty of our islands and the oceans that embrace our land would be cared for so that our grandchildren would live better lives than those who came from foreign lands generations ago to plant the seed to build the nation we have today,” said the Opposition leader.