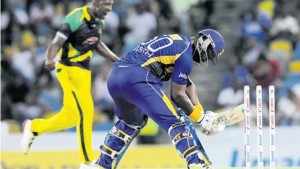 Dwayne Smith slammed a half-century and Robin Peterson, with significant breakthroughs in a three-wicket haul, were key contributors as the champions outplayed the challengers in front of a packed oval.

Smith featured in two half-century partnerships, the foundation to Tridents 161 for 4 after they won the toss and elected to bat.

Tallawahs lost Chris Gayle cheaply and slid to 50 for three before Chris Lynn and Horace Miller staged a recovery until wickets tumbled again leaving them 145 for nine when the overs ran out.

Tridents started briskly with Smith and Dilshan Munaweera producing a half-century for the first wicket which ended when Munaweera was bowled by Rusty Theron for 24.

Smith, who executed a number of skilful shots that earned him five fours and two sixes, top scored with 56.

He shared in a solid half-century partnership for the second wicket with Shoaib Malik, who batted responsibly throughout the innings to be unbeaten on 43.

But the Tridents’ opener, Smith, could do little to dig out a delivery from Andre Russell which was pitched in the block hole.

Tridents’ innings received another boost in the closing overs as a result of an inspiring cameo from Jonathan Carter, who scored 17 which included two sixes off Krishmar Santokie.

Tallawahs found themselves struggling with just 50 runs on the board, three batsmen back in the dug-out nearly halfway through the chase.

Gayle, attempting to hit a delivery from Rayad Emrit out of the stadium, skied the ball to cover as Jason Holder back pedalled a few yards to take a fine catch.

However, it was the outstanding Peterson with his spin bowling that rocked the top order, taking two wickets in three balls to send the visitors in turmoil.

Peterson first removed Chadwick Walton for 23 as the opener lost his stumps while attempting to play a tossed-up delivery.

Then he conspired with Carter behind the stumps to dislodge the bails of Mahela Jayawardene who was not to the pitch of the ball while attempting a cover shot.

Lynn and Miller teamed up to repair the innings by putting on a half-century stand for the third wicket.

But when Peterson, who finished with top figures of three for 26, cut short the reign of Lynn for a well-played 37, highlighted by a couple of fours and sixes, the momentum had swung decisively Tridents’ way.

An enterprising cameo by Santokie in the final over brought Tallawahs within range of victory.

Santokie scored 13 and his consecutive sixes off Emrit brought Tallawahs within 17 runs of the target with three balls remaining.

But Emrit held his nerve, removed Santokie, while Nikita Miller faced the final delivery without scoring.