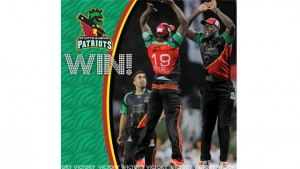 Basseterre, St Kitts: A superb spell of bowling from South African wrist spinner, Tabraiz Shamsi, helped the St Kitts and Nevis Patriots defeat the Barbados Tridents in the Hero Caribbean Premier League. Shamsi finished with figures of 4-10 as he combined with Shahid Afridi to restrict the Tridents to 135-8. A partnership of 85 from Martin Guptill and Marlon Samuels made the chase look very straight forward as the Patriots cruised home with almost three overs to spare. Samuels made 71 not out, screaming with joy as he hit the winning runs.

It took four overs for the Tridents innings to get going but once Dwayne Smith and Dilshan Munaweera got settled they accelerated quickly taking 14 runs of a Sheldon Cottrell over as the big fast bowler struggled to keep things tight. At the end of the Powerplay the Tridents openers had taken the score to 46-0 but as soon as the fielding restrictions were lifted the Patriots got their first breakthrough as the introduction of spin proved telling.

Munaweera `attempted to work a ball from Shahid Afridi down to third man only to chop the ball onto his stumps. It was another spinner that picked up wicket number two when Tabraiz Shamsi bowled Smith when the Barbados opener missed a swipe across the line.

It became very clear that spin bowling would be the most potent weapon on this surface as both Afridi and Shamsi got the batsmen playing and missing. By the halfway stage the Tridents had reached 62-2 and they were in need of finding a way to up the rate. A big six by Jason Holder got things moving again but the West Indies limited overs captain holed out in the next over off Shamsi trying to repeat the trick.

Shamsi picked up his third victim but Carlos Brathwaite deserved most of the credit. Shai Hope hit the ball to long-on and Brathwaite took a diving catch one handed with the ball just inches off the ground. The South African wrist spinner picked up his fourth wicket when he bowled Jonathan Carter, his second four wicket haul in two matches, and the Tridents innings was in tatters at 76-5 after 14 overs.

Pollard managed to hang around and finally got his strike rate up over 100 with gusto, hitting four sixes at the end of the innings as he top scored for the Tridents with 49 off 33 balls to give his side a chance, albeit a slim one.

The Tridents were always going to struggle to defend a below par total and their task was made all the harder when Munaweera dropped Martin Guptill off Ravi Rampaul at wide slip. The New Zealander was on six at the time and as he went on to 45 it proved a telling moment in the game.

When the first wicket came it was from an unlikely source. Dwayne Smith was brought on for his first bowl of the tournament and he dismissed Evin Lewis for 10, caught at mid-off by Pollard.

With both Shoaib Malik and Jeevan Mendis called up for their national squads, the Tridents had diminished spin options so there was a huge amount of emphasis on Robin Peterson’s overs. He was held back until the 15th over at which stage the Patriots were 108-1 and well on their way to victory.

The introduction of spin brought the second wicket, although it was a run out as Guptill was short of his ground going for a single off Peterson. It was too little too late as Samuels went on to his third half century of this year’s CPL as the Patriots captain led from the front once again.

Ashley Nurse was brought into the attack and his first over went for 18 runs as Samuels blasted his side home. The Tridents night was summed up when Carter dropped a simple chance to dismiss Brathwaite on the boundary off Peterson.

As the victory target was reached, Samuels was pumping up the packed Warner Park as the home crowd were delighted to see such as massive win for their team.

The Tridents remain at the top of the table but they have now lost three of their last four matches. The Patriots are now sitting pretty at third in the table with real momentum going forward.