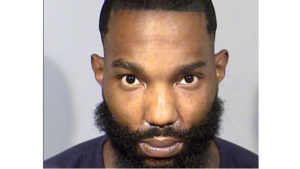 A 1-year-old girl in Las Vegas is dead after she was accidentally locked inside of a hot car and her father refused to break open the windows, according to authorities.

Sidney Deal, 27, was arrested on Monday after rebuffing help from both his brother and the police to smash open the windows and rescue his dying daughter Sayah, claiming that he couldn’t afford to pay for any damages to his new car, The Las Vegas Review-Journal reported.

Officers were called to the scene at around 3:30 p.m. and offered to break the windows, call a tow truck or get a locksmith for Deal, who had left his keys inside the car, according to the outlet, citing an arrest report from the Las Vegas Metropolitan Police Department.

Authorities said Deal declined and told responding officers that the child would be fine as the air conditioner was running. Instead, Deal called his brother.

When the brother arrived and offered to punch out the window, Deal “stopped him and said he wanted to wait for a tow truck” and “insisted he not damage his new vehicle, stating he had just bought the car and did not have the money to repair a broken window,” the report said, according to The Las Vegas Review-Journal.

Deal’s girlfriend also allegedly told police that she had called a locksmith, but the dad didn’t like the price they quoted so he denied their services, the outlet reported.

Police believe Sayah had been inside the hot car for about an hour when an officer was finally able to break open a window, Las Vegas Sun reported.

Unfortunately, Sayah was already dead, according to the publication.

Police spokesman Larry Hadfield said Tuesday that the officers waited to break the window because Deal was adamant about protecting the car and they could see the child breathing.

“The dad said that the A/C was on and the kid was playing, and when the officers arrived, they saw that she was breathing” Hadfield said according to the Journal-Review. “But when the officers got concerned for the child’s well-being, they broke the window.”

The Las Vegas Metropolitan Police Department did not comment when contacted by PEOPLE.

Deal was scheduled to appear in court on Tuesday, but did not attend the hearing due to medical reasons, KVVU reported.

According to online jail records, Deal is currently held Clark County Detention Center on $20,000 bail. His next hearing is set for Thursday.

It is unclear if Deal has retained an attorney who can speak on his behalf.